REVIEW: Sweat of a Sun God, by Bloom Rose and IVANOV. 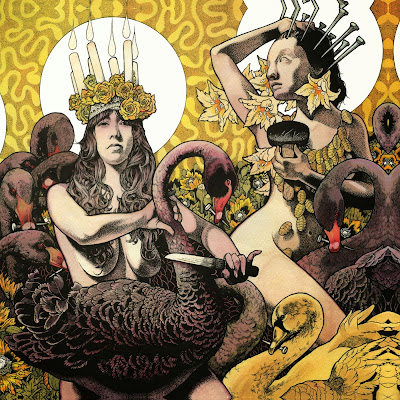 1995. Things weren't great at Adder Entertainment. The company was running in a dozen different directions, tied together at the tail, slowly skinning itself with its own momentum. It was an ugly company at the time. Naked. Raw. It was trying lots of things and none of them were firing. There was a conflict here, between being the company Æ was and learning how to make that profitable, even if it meant shrinking down, and the people who wanted to be as big as ever. Bigger! And, in fact, who wanted to use the might of their size to crush all pretenders to the throne. For a few people this was ego. Where Andrew William James was concerned, it was a cocaine addiction that would stop a Belushi in its tracks. They must never know.

In this chaos a lot of things were getting released with minimal oversight. Editorial, including Bloom, were just too busy trying to herd cats. She was so busy, in fact, that she could not give much notice when her office was broken into. The ledger was untouched, petty cash was there, seven completely disassembled snapdragons were individually filed in her cabinet, piece by piece, but otherwise nothing out of the ordinary had happened.

Hindsight can make things seem obvious but you have to remember: Bloom Rose saw Ivanov die.

All of Æ did, during its disastrous inaugural team building exercise at a North Carolina white-water rafting firm. They saw him jump. They saw his tattered, bloody rags. They lost a weekend to his funeral, made without his input and without any personal mourners. (This is remarkable mostly because of how Ivanov's most recent funeral went, with his ashes being mixed into the ink for 111 members of the infamous Æ Tatoo Society. 57 are incarcerated today.)

As a result of faking his death to avoid service in Vietnam (Ivanov was doing a lot of ketamine and storm chasing during this period), Ivanov had not been paid in a while. He casually broke and entered with the intention of leaving a notice of change of address, and it was during some light pilfering and looting that he came upon the text for Bloom Rose's abandoned masterpiece Sweat of a Sun God.

Bloom had accidentally created the ultimate lure for Ivanov, a godcrawl through the fallen corpses of slavic deities where each body represented a distinct post-collapse region of the former Soviet Union. A strange squeezed-out vision of failed optimism, bloated grime, open-faced despair, lurid propaganda of the dead, bastard ass fire orthodoxy, nobody there at all, hollow follow walkers, cave rockets, spacemans all naked and silver and shining like starlight and marching in formation, the wet and hungry sucking roads sodden with the blood of all failure, cold, dark, colder, darker, mathematics, slavery, freedom, unofficial slavery.

Hey, it was the 90s. As usual with Bloom of course, this was about someone else. Bloom had a friend, little written about but dear to her, named Rapella Kruskin, and Bloom was by her side through the bulk of her father's esophageal cancer. If you've never had a family member who has suffered from it holy shit. It is the blackest most metal thing I've ever seen. Imagine drowning in the physical weight of your body. Your lungs filling with themselves. I imagine it daily in a "Spirit are these the shadows of things which may be only" kind of way.

This is not technically the first megadungeon but this is the first big, proper, high-profile megadungeon. Dazboh alone is a mini campaign to itself, whence the title hails: all the treasure here takes the forms of lasers your characters can make, but the longer they stay to loot lasers the more black holes the fight, and the more they are on fire.

There's also the pillar, deep in Vostok, which represents a perfect idea, different for each PC. A dead child at its base decided the pillar should be protected from all other minds, and so the longer you dwell at the pillar dithering on a course of action, or the more you come back, the more powerful opposition you meet. Compelling you to taking a desperate action, rather than letting beauty out into the world. People like to read into this as Bloom describing her own situation but I like to think that the woman who watched the American 60s die from its own kind of esophogeal cancer saw a kind of kindred suffering in the slow-crumble moldering of the eastern bloc.

Anyway, it was considered unfeasibly unprofitable and, so, was shelved by Bloom at James' request.

The Æ New Year's party at O'Charley's is interrupted by a courier, slightly bleeding, with a bulging pocket and explicit instructions. For a moment, just that, it is sleeting thick and angry. Seventeen enormous canvases are toted into the O'Charleys, most depicting maps, some depicting bizarre portraiture, each with a K-Mart price tag attached for an entirely reasonable sum of money. Except for Ivanov's masterpiece, Perun Falling, where, in lieu of signature or price sticker, Ivanov wrote "chruck (sic) + ketamine."

No one knew what they were. Nobody knew where to put them. Nobody knew Sweat of a Sun God was pushed through production behind their backs and was in stores at that very moment. Ivanov hand-delivered a shipment to a nearby American Legion post, which cause no shortage of constarnation regarding Soviet terrorism from the near-dead legends. The Donnybrook O'Charley's still has one of the pieces, in which sharp-eyed fans spotted several hidden instances of coitus. At last count it was seventeen.

This was one of the biggest, fanciest, most gorgeous, original, well-thought out pieces of product Æ had put out in years. It is one of their single finest products ever, one of the single finest RPG products ever. It wasn't chasing a trend or trying to beat one of their new competitors at its own game. Andrew William James lost his fucking mind over it. The story of what happened next is known, but we'll get to it next.

It was a profound profit for the company. Some still say that this move could have saved the company, had Bloom lived, had the fire not happened, had Ivanov been more forthcoming up front, or if he hadn't tried to reinvent himself as a tiger motorcycle guy in his sixties. It's hard to say, though, because here's the fucking crime:

I have been researching this book since I started these reviews and I've never found someone who has finished it. Fact. Oh people played it, sure, and they loved it, fine, and they think it looks great on a shelf and they support every decision within it IN THEORY. But life always seems to find a way of pulling people away from the table. Sweat of a Sun God is a widowmaker for RPG campaigns.

Some people think that's perfect in a way and they make some horrible allusion to Marilyn Monroe or John Lennon or other rich white people and I say horseshit. I think that's just wrong all directions. But I do think it is a fantastic legacy.

Bloom Rose never set out to be a great games designer. She set out to be a great person, to change the world, to be respected in a field that thought of her as a creature, to achieve excellence in everything she did, to constantly read and explore, to care about other people, to make the world make sense with her typewriter. She just happened to make games along the way. Sweat of a Sun God is a perfect example of a singular, pearl-like creative expression from two individuals at the top of their respective games and at the end of their respective ropes, and it is perhaps the perfect example of the perfect game book as un-run-able thing. Because the perfect inspiration for any game you run isn't a bunch of monster math, it's INSPIRATION in the face of fear and suffering and wonder and beauty and trying and forward and better and vision and A Person as a whole, and that comes from life.

Forgive me for waxing a little Lovin' Spoonful but it's the truth. Bloom lived her life believing the world is a place we go to make a better world, and that such processes never really stopped. She applied those ethics to her work. To her company. It showed. It always showed. The idea that people draw enthusiasm and inspiration from her work, even if they never use it in a manner consistent with its presentation, is a hell of a way to live on and I should be so blessed. By I suppose the loss of all other media.

The slide toward the inevitable concludes with the end of the Bloom Rose Sequence, Lain to Rest At Last, At Last. At last. And then, I promise, a few more of these, at least, which aren't a bummer.
Posted by Daniel Dean at 10:50 PM