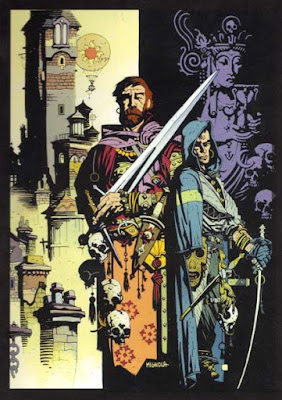 This is sort of based on the T&T Rogue and that "good at/bad at" system someone put together (I forget who?) and Telecanter's famous rogue but adapted for a FLAILSNAILS style experience and with an eye on this setting I've been creeping toward. Normal Thief proficiencies/restrictions/XP thresholds/saves/HD.

Each level choose 1 thing you are Skilled at. Whenever you would roll to do that thing, you roll an extra die of whatever kind you're rolling (usually a d20 or d6). You may always elect to take the higher roll or not, for the rare situations you might want to roll lower. If more than one roll is successful then the DM may either improve or multiply your success effect or grant you some additional boon, at their discretion.

At first level and at every even-numbered level you may either choose two Skills or one Expertise, which is a Skill that grants you two extra dice.

At third level and at every odd-numbered level you become capable of using a different kind of magic item. First comes scrolls/potions, then rings/clothing, then weapons, then armor/shields.

At first level whenever a Robber employs a non-combat skill while engaged in combat their allies EACH gain a damage bonus for that round equal to the Robber's level. If the Robber is off opening a safe during the gnoll fight then this doesn't apply.

At level 9 a Robber decides whether to become a Fighter or Magic-User and levels up from there using the Robber XP chart, gaining any abilities by-level as if they were the new class and the capability of using any magic items they can't use already. She no longer gains Skills, Expertise, or Supremacy. You do, however, gain a new ability score: Fortune. Once per day per level of Fighter or Magic-User the Robber possesses, they may take their Fortune roll in place of an attack, damage, or saving roll.

So what are Skills? They're something any character may attempt but they get only one die per shot, while Robbers get up to 4. This includes metagame concepts like the wandering monster check (which you can chalk up to the Robber's evasiveness) , initiative, surprise, navigation through wilderness with a map, etc. It includes pure combat elements like to-hit rolls, maintaining a grab, two-handed fighting. It includes old skills like Rope Use, things like LotFP's Architecture, 4e's Endurance, 5e's Persuasion, and Cooking and Herbology and Mapmaking and Tattooing and Seduction and Camouflage and Smithing and Disguise and Impressions and Handling Your Ale.

If you ask for something weird for a Skill it's up to the DM, who always gets to define when your Skills are appropriate. Don't go thinking you can just take Skills in Fighting and Stealing and call that lunch.
Posted by Daniel Dean at 2:46 PM