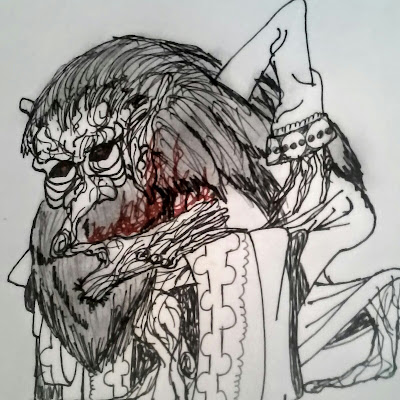 So the rules of D&D aren't the boss of you.

The rules say I can be a Genasi. I hate Genasi.

More than Klingon-Orcs, Dragonborn, or the adopted Gnoll, Genasi really represent a trend in certain D&D thinking that became pervasive over the edition and supplement bloat and looks downright epidemic if you ever look at anything like the current 5e wiki (or, to an extent, the FRACAS): taking something that might be a fearsome and dangerous element of the world, something which should at least be rare and surprising and wondrous, and scaling it down to a safe and balanced form that is knowable, freely abundant from the player side of things, and at worst just misunderstood or troubled. If you're going to have dragons in your game you want them to be a big deal, right? Or even Dragon Men. It's harder to get that if your tent-mate is also part dragon herself.

Genies and djinn have even less to do normally in a game, usually present as just fancy elemental lads or introduced as a glorified plot device. I'm not even a great fan of using these guys in games because any elemental magic and wish granting that can be done by them seems like it would be cooler coming out of a dragon, right? But if I am going to use them then I want it to be a big deal that the players met a djinn. It becomes less of a big deal if this big impressive mystical creature is basically "two of Steve's guy taped together." The opposite also holds true: if I'm not going to make a place for Dr. Pepper in my game I'm sure not going out of my way to include Mr. Pibb, no?

There's other reasons they annoy me (races built around class features, how most exotic demihuman options end up being animal people or element people) but I'll stay on topic...

The rules don't say I can be a Kappa. To those rules I say, fuck off Water Genasi: I am one. This is all without changing a single thing in the way the race is written. If I wanted to I could decide that Air Genasi and Aasimar suck so much they need to be combined into one thing, make them beings of corporeal light and color, make a whole new kind of guy I can be. If I wanted I could look at an Earth Genasi and turn them into a reasonable Fungoid. I could even look at Fire Genasi and decide that they're even more useless than normal, since they're almost exactly Tieflings who I already don't love, making them an element-man version of a monster-man built around innate spellcasting. I could look at them and spit them out lukewarm...or I could make them work for me.

The rules don't say I can be a Domovoi, the little house spirit who lives under the hearth and throws a big ol' fit when the people who live in his house piss him off. Posing as the master, moving things around, making noises in the night, rarely glimpsed, something not a demon or a real god but something you beseech and honor. Something who bars evil spirits and crooked people from your home and protects it from disaster. Something that dusts the mantel and waters the plants when you forget, keeps careful accord with the mice, a spirit who talks to the ghosts in your shithouse and the demons who tend your barn.

To that shit I say my name is Ded, short for Dedushka, you may call me Grandfather. So far everyone just calls me "the domovi." So I fucking did it without changing a single thing.

I'll go you one better: the rules say no one wants to be race-as-class any more, you need to be a different thing. NOPE. I'm not a domovoi bard or a domovoi dragon sorcerer. I am domovoi, and my primary goal is to just grab little bits of whatever I have to in order to get the abilities a powerfully vested and fully venerated domovoi from a hale and loving home should have. That means mixing up classes. That means, since this is a newer-edition ruleset, even looking through feats. But my CLASS is always DOMOVOI. I can show you the math and the breakdown if you want but I haven't even made any shit up. Everything is by the book and above board.

The rules say I cast Unseen Servant to rotate the blades of the windmill for me. No I don't: I forfeit the actions and other things that such a spell would require, sure, but I track that myself. What I ACTUALLY do is knock on the windmill with my stick and talk to the house, convincing it to take me up to the next floor. The book says I cast Detect Magic and there's a rainbow aura that tells me its school. That doesn't happen. I can SMELL magic. Fiendish magic smells like Red Hots cinnamon candy, necromancy smells like rotten eggs, demons smell like motor oil. Do I use a cantrip to snuff the flames in a room? Fuck that, I crawl all over and lick em up like a lizard and I eat them.

The rules say I have certain random personality traits. That's fine, but I get way more mileage and a more well-rounded character from using my Muppet Maker.

The book says I have a spiritual connection that powers all my abilities, a connection to some higher remote god. Instead I am a spirit like unto an incredibly minor god. My spiritual connection is to the people who live in my home, and to the friends who make my little pop-up hose (I paid 4x the fanciest tent price to basically have a Fisher Price playhouse I can assemble) FEEL like home. They 'worship' me with their respect and appreciation and with raising tea in my honor, tea I brew with my bare hands.

Certainly the minmaxy Build Bros on any given forum would call me not optimized. To them I say I am entirely optimized. I am a custodian spirit and caregiver whose affection for peaceful creatures and instincts to protect those in danger are paramount. I have never slain the tiger but I have helped to win the day.

I pay for every kind of spellcasting focus and holy symbol and stuff possible and put it all into one big stick, a piece of wood used to bar the door against nighttime invaders and evil spirits. I find myself in a land of vampires and that's fine by me because I and my kind are the reason vampires can't just barge in uninvited. We block the way to evil spirits.

My flesh is like floorboards, once polished but now splintering with strain and age the longer I am away from my home. There are even little nails holding it to my muscles, and places where the boards meet. I'd be just shorter than an elf at full height but I am "evolved" for sweeping and firetending, so my resting position is a painfully stooped crouch that puts me only at the height of a halfling. My clothes are moth-eaten curtains and threadbare tablecloths; they are ripped clothes and sodden quilts, which I am slowly repairing over time with the needles I pull from my mustache. My teeth are decorated ceramic. My bushy hair and beard has the consistency of broom-straw choked thick with dirty cobwebs. My fingers and toes are long, with extra joints, and my nails are charcoal. My eyes are deep-recessed and shine like smoldering embers. I own a cat.

And I am here to be the HELL out of that guy, and beyond that to help everyone else be a little bit more awesome.

The D&D we play is always better than the D&D we PURCHASE. Never play a game (or play with a DM) who insists that you live up to them. Live up to yourself, and do it in a way that makes them want to live up to you. The rules will never catch up to you. Do not scorn them, no, but pity them, and do not wait for them.
Posted by Daniel Dean at 5:21 PM

The Machine Men of Doublecrossroads 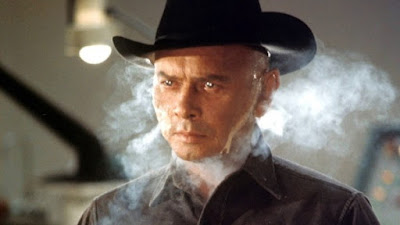