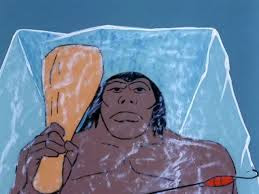 1. A caveman has awoken in your home setting, a primordial man. He is spreading primitivism as he goes. In his wake people have fought one another tooth and nail, blood was spilled, lived ruined. He's holed up in the old monastery where his new "tribe" are too cowed to challenge him, afraid of what he might do next.


2. The adventure begins when it's 16 Celsius outside. For every in-game hour that passes the temperature drops by 2. This affects about a ten mile radius around the caveman. He will plunge the region well beyond winter unless he is stopped today.

3. Before the session begins have your players write down 100 words. When they enter the monastery all characters lose their vocabulary except for 1 word, rolled randomly from the list. Wizards get 1+Int bonus words. Nobody can read. Players must communicate using only this word which almost no other character will likely know. Instead of treasure once a concept has been demonstrated enough to be explained, or once a familiar item or idea resurfaces, the DM may allow players to regain another word. Actually speaking of treasure any relics or silver that go missing from the monastery will be chalked up to the mad monks or the caveman, so...

4. Being in the same room as the caveman reduces your Intellect by 1 every ten minutes until you have dumb animal intelligence, say Intellect 2. If you ever reach that you lose even the one word you know. The brothers here are all basically animals now and they will defend their territory on sight. They are young and virile and that's actually weird...

5. When you find the caveman you will fly into an uncontrollable rage and must attack something ever round until the caveman is dead or you are. Keep in mind that the temperature effects and intelligence loss effects will still progress in this period.

6. The caveman has missed a lot of time and he needs to make up for it; yours will do. Every time the caveman touches you or every round he sustains that touch you de-age by a year.

7. Successfully kill or re-Captain America the caveman and you get his extra time, aging 1d100 years and gaining an absolute shitload of XP, a bunch of new languages, and knowledge out of step with your setting, like maybe firearms or trains or lasers or cloning.

8. If the caveman touches the idol mounted in the cloister alcove then the caveman will wither to dust as the Saltpeter Madre takes HIS fluctuating time and awakens herself, like a living statue, from a sleep she entered before the current gods. Do not fuck with her run away just go go away and be somewhere that is not here.
Posted by Daniel Dean at 10:45 PM

Email ThisBlogThis!Share to TwitterShare to FacebookShare to Pinterest
Labels: dugeonnnnish 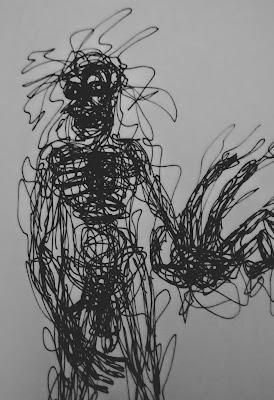 They are a little mad.

She was a great woman who touched the lives of thousands. He was a philosopher in his own way and he changed the way the game was played. She was a villain and brute but her legacy shaped the known peace. He was an idiot who left whole nations as dead swamps. One invented the modern world, at least through property of transference. One reinvented the very notion of evil.

No one remembers them.

The shape they pressed into the world lingers. The edge of knowledge remains of their knowledge and deeds and faces. All who their reach touch, a reach of centuries, a grasp of continents, have an inkling of their import. Their existence, implicit, is never intellectually wondered upon. It is only a fleeting inkling, a sensation like you forgot someone's name at a party but a thousand times more vague, as a thing unto

QUICKLY before you can think only answer: who invented stairs?

Three two one time's up. You've done it to them again.

An extreme example but by no means a rare one, these are lives no one even knew they would need to know. Some people have never thought of them as a person, only a role, a hole in time. That's closer to the truth now.

Distorted and vague, all notion of them is warped echoes. The exaggerated shadows of fire flicker, long and then long gone. Their lives were once so important that today almost everyone in the world sorrrrrrrt of remembers them. They knew themselves, though, and this memory insists upon itself. So desperate are these thoughts for detail and identity that they physically manifest. They are spider silk in an autumn storming wind, desperately reaching in all directions at once, anchoring themselves to what they can, searching for some manner of form and permanence in the world. They earned a permanence in the world, but now must only take what they can get.

These are usually plasma flickers like foxfire. There is no real consciousness so this is not a conscious, sustained effect. Unless, that is, they are seen: then this is how someone will concretely remember them. They will presume. They will personify. They will ascribe a will and aim to these things. The monsters.

Now they are trapped, a combination of a shell of their former life and a whole new existence forced upon them, often at odds with their actual nature. They persist, usually as dread creatures but, sometimes, as strange and mercurial champions.

They share vestiges of what they once were - discoverers, tyrants, magus, nun, fire bringer, lash - so must be considered dangerous. Their indistinct forms are difficult to notice and horrifying to behold. Their nature is somewhat elastic and they have a limited ability to unravel themselves. They cannot, however, truly shapeshift. They cannot take on any permanent, distinct form.

They despise those who can.

They abhor shadows for the true shape denied them.

They hate all undead, especially ghosts, for finding the second life they will never have.

Most of all they hate you. You forgot or never even thought of them to begin with. You made the scribbly people this way. Everyone.

They are everywhere. They are nothing. They are only traces.

They are angry.
Posted by Daniel Dean at 9:41 PM