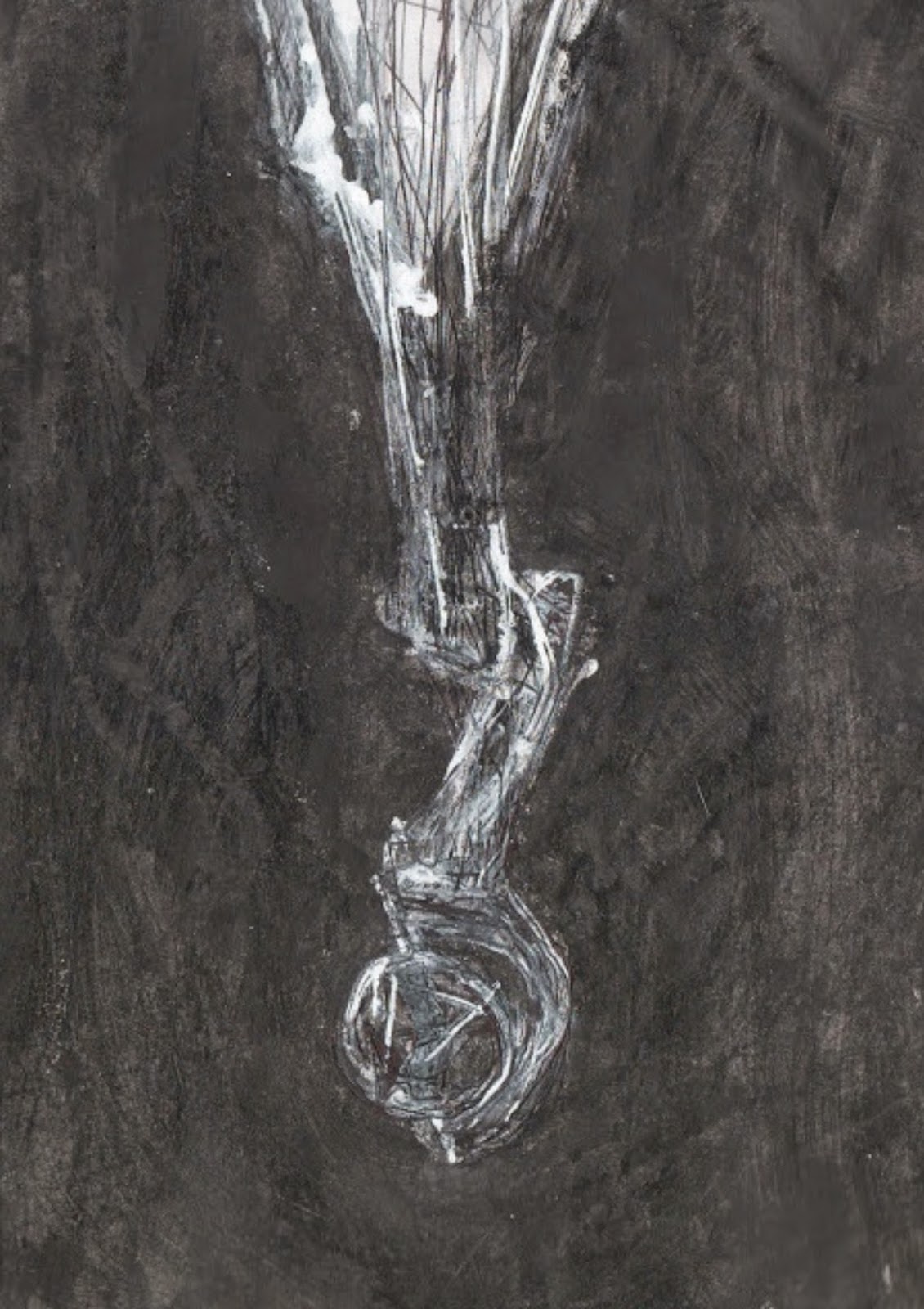 He'd be a Thief, unless your rules had Paladins, and then he'd be a shitty paladin.

It is not the job of a critique to convince you to buy anything. Fuck you. Buy this thing. Will you like it? The phrase "There's a flood and your PCs are compelled to investigate!" is not in the module because it got in the way of poison and rules for the stairs, and because doing awesome things is taken as granted in your players. You have all available information to consider whether that's your kind of purchase now. This is not a pitch for the thing.

The thing is not the pedigree of its creators. If you don't know these people, +Patrick Stuart +Scrap Princess +Alex Mayo, you should stop reading this. Go spend the next ten minutes with them, with their works, and you'll certainly buy the thing without me buzzing in your ear.

The thing is not about me. I wish it was. I'm a follower unfortunately, and while this kind of material and quality and publishing effort are things I aspire to it's a disservice to artists everywhere to let that kind of shit get in the way. That said this book makes me want to WORK instead of just IMBIBE.

The thing is not YouTube or a GeoCities message board so if you see someone review it and go "wahh some typos" strangle that person. It happens and it'll be dealt with I've no doubt. It doesn't matter. Shut up.

Now what exactly is this thing? I said "module" in the title and I suppose I stand by that but it's as much a setting to itself as something like Carcosa or Quelong and it's explicitly not filled with enough advice on DMing to make it as valuable as any chapter or WHOLE BOOK I've read on DMing...the advice is: use the stuff in the thing, do it evenly and inventively, in a way that entices players to look at/use more of the stuff, in a balance that skews slightly toward awesome. (If you need more than that this book will not help you much.) It could be run fairly linearly or fairly sandboxy, depending on your proclivities. Module seems fairly reductive, though, because most modules I think of tend to be little books about people you don't care about who are certainly more important than anything your players are doing or adventures that read like Mad Libs about killing farmers.

There's no Acererak or Sephiroth. There's nothing that turns all the candlesticks back into butlers. There's no scheme to run the people of Carrowmere off their land and your party are not Meddling Kids.

Any chapter of this would serve as its own excellent +One Page Dungeon Contest entry, but I'm glad it doesn't. More room for fun.

Everyone in this book is alone, terribly close together, getting hedgehog-dilemma'd and generally getting crushed by the fact that this event and the world it inhabits are bigger, simpler, stranger, and older than you, and does not give a fuck about you or really anything in particular. Cities rise and fall, as do dams, and you have no part in that. You're in the aftermath. People have little, everybody wants something different, nobody can give it to them, and there's a fortune up for grabs. Maybe the future of the lands.

Really good RPG books tend to be filled with things you want to steal as much as possible to make a hundred different little corners of your game better OR a world and perspective complete and distinct enough that you want to live in it and wallow in it and realistically you could do nothing but that with a group for three years and never find the edge of the map (in terms of what can be done with that kind of setup, the map may literally have edges, the edges may literally Be Tygerf). Surplus to requirements but always nice are fun mechanics. This book has all of these so I'm prepared to call it a great rpg book, if this surprises you go back to paragraph 3 do not collect $200.

So let's talk about the nuts of Deep Carbon Observatory, by which I mean let's discuss the fact that there's more material than you'd find in bigger, more expensive, more "serious"/"real" RPG books before you even GET to the actual Deep Carbon Observatory. The observatory itself is a catalogue of unease and it's disorienting and doesn't ever say "this place makes you sad" but there's a grinding drear going on in the background that means even if you find the riches within you're going to be a thinner, more harrowed individual than before. No I don't mean your characters.

Let me talk for a minute solely about the illustrations and maps because the biggest thing Scrap's art has always carried, to me, and what makes it so evocative is that sense of immediacy, and therefore vigor and vitality, therefore realness. Realness of atmosphere, particularly, and Scrap's probably the best pick for this kind of material. We don't need to test the printers of the world and their capacity for black. Everything here is damp. Everything here is shapes. Everything here comes from an aesthetic beyond the Star Trek alien "human-but-with" model. Illos and prose.

I have specific and limited criteria when discussing layout: I want it to be clean, I want to be able to find what I'm looking for, I want to have plenty of room for when your monster stats are so obviously wrong to write in amendments, and room to doodle. This book satisfies all that. I can also be something of an index snob and this book, while lacking one, is (as a PDF) bookmarked to bejeezus, which is the next best thing AND a module I want to see. Things like layout fall into the same area as editing to me where unless you really look at it and go "Oh this is great editing" you shouldn't notice it. That may come off as a backhanded compliment but it's not intended as such. I do want to note that, in keeping with my comments above that any PART of this thing would be enough, I like how this information is separated by chapter into basically individual sub-modules.

I like that the book opens with getting the players involved via hard decisions, where any choise they make means they lose somehow or that someone is mad at them. This is my favorite way to run, competing domino topples. I like that there's a timetable and forces acting against the party they may never know about. I like that even if you prep all this and your party says "FUCK no" everything they DIDN'T do comes back to bite them directly in the ass. I like that the book gives you ways to look at traditional D&D Underdark and its races in an interesting way without that reeeeally seeming to feel like the POINT of this all in any real way. I like that words like aboleth and bulette are used for familiar reference, even though clearly you're going to need to keep some stranger words handy just in case you have some MM study at your table. I like that the golems are represented as a way to tangibly reward your players at the table, which is neat, but also that their 'reward' is a huge pain in the ass and doesn't help much in itself, which is doubly nice.

I envision a world where people have shirts and stickers expressing their pride in even getting this adventure started before their party gets itself killed or distracted. I Survived Carrowmore. Where dead kings kill for disobedience, shouting orders none understand. Where everybody sits up and goes not just "Man I want to party (as in be in one) with these guys" but also "I want to RUN for these guys" and make stuff for these guys and listen to these guys I never woulda known of them without this! Everything huge dies, everything small is waiting, and all gold and gods are grist. Deep Carbon Observatory can give me that world and it has talking skulls in it. I want to run it, play in it, old school D&D, brand NEW D&D, I want to make people buy this book so I have more people just to TALK about it with. And I want to read it over.

Email ThisBlogThis!Share to TwitterShare to FacebookShare to Pinterest
Labels: I Do Reviews Now?
Newer Posts Older Posts Home
Subscribe to: Posts (Atom)
IT'S NOT SAFE FOR WORK