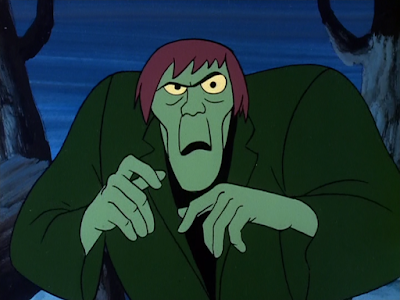 You have Thief saves. You level and fight like a Dwarf. Your weapons and armor will vary as discussed below. You need Intelligence 9-12 to play this because you can't be too dumb but also can't be too smart. Strength 13+ also required why not. Use I guess d6 for HD.

You know who else is a superstitious, cowardly lot? Everyone else besides criminals. Dress your scare tactics up in a little drama, tell a good story, and most of your work is done for you. It's about misdirection and control of expectations. Mostly it's about profit, reaping the rewards of fear. You know what you must become.

A creature must make a Morale check (roll 1d12, equal/less than the creature's Morale rating) in order to approach you or attack in melee. They may attack from distance or cast a spell without making such a check. A creature failing this check may be Menaced on your next action. They may make another Morale check the next time they try to attack you.

A creature succeeding on the check does not have to make a check to act against you again, but if they failed they may still be Menaced.

Once a creature has failed a Morale check against you, they may always be Menaced. Retainers as indicated above may always be menaced.

Each session you must spread your legend. It is important to embellish well, otherwise you won't be truly feared. After that the DM knows when someone in that session has heard your legend or not. If they have they must add 3 to the result for their Morale Check before determining success.

I did not look at the handy dandy ghost story generator written for me years ago by +Patrick Henry Dollah in the old 2013 Secret Santicore before writing this but I should have cuz it was great. You could do that as well. I'll put a link here later I'm sleepy.

You add your level to attempts to grab.

You can throttle someone I guess or you can shake them like a Yoo-Hoo til they pass out. Either way you may elect to do 1d6+Strength Bonus-per-round automatically to any creature whom you have seized (no larger than twice your size).

TOOLS OF THE TRADE

You have proficiency with one of the following:

All your powers reside in your Guise. This is a carefully constructed uniform (usually with a mask) allowing you to seem much more fearsome than you normally are. Your Guise affords you 1 point of Armor Class.

If this Guise is ever ruined or if your Guise is removed then you lose all your class abilities and are a suckier Fighter.

If you are able to escape and leave the area you may return with a new Guise after spending 1 day and 500g for each character level. This may allow you to select new Tools of the Trade.

At any time you successfully scare off (or kill, I'm not picky) everyone in a building you may claim that as a Haunt. You incorporate your Haunt into your Legend when you tell it at the beginning of a session. People are more likely to have heard of you before entering (again the DM should have the call here but should also maybe softball this) conferring your Legend's bonus.

While in your Haunt you earn 5% bonus XP, force an additional +1 penalty to Morale checks against you, and have AC +/-1.
Posted by Daniel Dean at 9:56 PM 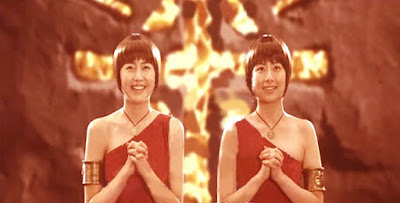 This is going to be a little different. You can use any weapon and wear light armor. You save and you level like Thieves. You need Wisdom 14 to play a Monster Boy.

You are blessed among men. You are plagued by spirits. For there are monsters in the world. The world in a real way is theirs, not yours, yet their ultimate fate is in your hands. You have sought power? Now you have it. You have sought only peace? You in turn were sought out to carry this message of peace. You have insight into the behemoth. You are connected to the thunderers. You're a Monster Boy.

You are filled with Monster Girls.

You may Call the Monster Girls a number of times per day equal to your level +1, but may always Call when you encounter a monster with 9+HD. No one else can see your Monster Girl unless they have greater Wisdom than you.

In instances where they may be targeted directly it is treated as a called shot. Monster Girls who are hit are Indisposed. An Indisposed Monster Girl may not be called again that day. If all of your Monster Girls are Indisposed that's it: you've failed them and the compact is broken. From now on you're just a Thief with no skills.

There are different kinds of Monster Girl.

The Coven- There are five of them and they appear as brightly colored young women of human size. They are like in intent but disparate in spirit, and disagree with one another. When all five are present and their power is united there is a 10% chance that their powers will fail, be ineffective, or work counter to intent. For each member of the Coven not present when appearing (I'M not appearing with HER after what SHE said) that chance increases by 20%. When calling them you either spend 2 uses of your Call to summon all five or spend 1 use of your Call and roll 1d6 to determine how many appear. On a 6 not only do all five appear but their powers have a 0% chance of failure.

The Twins- These Monster Girls can be creepy, sometimes finishing each other's sentences, sometimes speaking simultaneously. They appear as 6" tall women. They do not have a risk of failure associated with the use of their influence. They require 2 Calls.

The Goddess- This is the Monster Girl inside of you. She does not appear separately from you, though you always see her in any mirror or reflection. Instead she transforms your aspect into a more resplendent one, though only the very wise understand your suddenly awesome bearing. She only requires one use of your Call. Because her aspect is in your body she (read: you) may be targeted normally. She does not become Indisposed unless you drop to 0 HP.


Guidance- Monster Girls give you Guidance. When they appear they will answer as many questions about a creature as it has Hit Dice. The more powerful the creature the more they know of it, the deeper the heart into which they peer.
For creatures with 10HD or less ask one of those questions. You may ask 1 question per round. For creatures with 10+HD more open ended questions may be employed. They are here for the super-storms; anything less than that and you're just asking whether it is raining.

Awareness- While they are present you may only be surprised on a 1.

Foresight- You may no longer be surprised except through magic cast from a higher level than your own. In fact, they warn you enough in advance that you have the option of surprising your adversaries.

Understanding- They may understand the thoughts, fears, emotions, and intents of creatures without a language. Think of it as fluent psychic one way communication.

Communication- They may focus their mind to send simple messages (a number of words =your Wisdom or fewer) to any creature without a language.

Protection- You gain a bonus to your saves while Monster Girls are present.

Presence- You may make yourself known as an agent of the Monster Girls for your Charisma x30'. You may elect to target all non-hostile creatures. They will know you on sight, on scent, and will know your sound. You will not have to risk the time it takes to show yourself a friend or powerful foe: you will be known immediately as such.

Connection- Your senses begin to merge with that of the cosmos, facilitated by the powerful bond you now have with your Monster Girls. You Hear Noise 6/6 and may always roll twice for Search or Perception or whatever. If you touch a creature you know how many Hit Points it currently has. You have mild celebrity by this point and have a 1 point reaction adjustment from anyone who has heard of you, 2 points if you are touching them.

Dismissal- A creature with HD equal to/less than your own must save against Wands or begin traveling away from your current position.

Instead of Calling on your Monster Girls for their constant effects or the benefits of their presence they can empower you from within. Though they help you there is a price and they may not be able to come when you Call. You may spend any number of Calls per day to achieve Special Effects. They may be present or not when you gain the benefits of Special Effects.

Regain 16 Hit Points
Cure Disease
Remove Curse
Clairvoyance (can only let you look at great creatures without a language, the shrine to same, or other Monster Girls)

Guardian Power (+1 AC, +3 to hit, +5 damage, +7' movement, 1d8 rounds)
Teleportation (only to places where you have encountered a creature without a language possessing more Hit Dice than you)

Champion Form (Size, AC, attack, damage, save, move, etc as Stone Giant for 10 rounds)
Resurrection (If you die with 10 Calls your Monster Girls use this Special Effect on you automatically. Whether for your own life or the life of another Resurrection requires the sacrifice of your Monster Girls. Afterwards you are a mundane man who must only remember what it was like to be a part of the bigger picture.)
Posted by Daniel Dean at 12:06 AM