I have to remind myself of this fact. Quick aside, please reacquaint yourself with my disclaimer to the right before reading forward.

If you took all those not-quite-adventure scenarios I've posted here (which I will not link directly right now) and boiled them down to their essence, along with a half dozen things in progress in my folder, or even Better Than Any Man or In the Woods or Deep Carbon Observatory (three books I'm on record as being a big fan of) into their purest essence you would end up with

A human society small in the face of the larger world and longer time
Confronted with moral dilemmas and tough choices
While endangered by forces much bigger than their borders
Often additionally facing some other supernatural ticking clock that may or may not be immediately evident
For reasons that have fuck all to do with anything the people have actually done, often without malice.

The apocalypse is incidental.
Anybody with any power does not consider you whatsoever.
Your fellow men usually don't either.
You hope the Player Characters MIGHT care enough to go kick the ass of something bigger than all of you.
It might not matter.
Many of the things name-checked above are, if not truly system neutral, system flexible. However I would say that all run pretty definitively in any iteration on an Indifference Engine. If we call this a genre in our little neck of the woods then we have a new cupbearer in the pantheon.

Faux-Pas by Nick LS Whelan and the rest of Team Hocus - a coterie of familiar faces and names associated with producing solid work - has a weird cover. The art throughout the book makes interesting use of collage to great and inspiring effect but I don't want to end this write-up on a down note so let me get this out now. Putting one of the most iconic images from the last two decades of horror movies just right iiiiin there threw me, I gotta say, as sure as if the ghost kid from the Ring had been in the background. It's not enough to put me off of Anxy's work here - or elsewhere - that would be quite a task. It's not enough to put me off the book, or else you wouldn't be hearing from me right now. Bryan Singer has expressed regret before in his one big pop culture reference in the Usual Suspects, to the Incredible Hulk TV show. Funny that THAT'S what he seems to regret most about that film.....It did take hermetically sealed world and uncork it for a moment to let the outside world in, and it was jarring. Unintentional pun but I stand by it. This isn't a Family Guy moment but probably my biggest reservation about this little book.

Which should be an indication.

This is so in my wheelhouse that I doubt Nick Whelan's existence. This is clearly some form of tulpa who produces exactly what I always wanted: the kind of thing I'd write, but that I didn't write and so is a complete surprise to me. I would use this to kick off a campaign. I could see this very efficiently ending a campaign. I would use this in a hex crawl or I would use this as a complication for something a player wants to accomplish. In a goat, with a boat. This is why I love location based ventures and the proverbial dungeon so much, you can pop 'em in anywhere. A super-villain campaign or an intended plot arc has to be set out in a specific paradigm. Something like this? I can keep it in the car or on my phone, run it in a Del Taco with minimum prep. The enemies and NPCs are human except where they're not. The environs are familiar until they aren't. There is a shape and a guiding principle to the threat but a ton of flexibility.

You can make this weirder in the margins. You can make this bigger with minimal effort. But this is a beautifully popped kernel drizzled in glow-stick butter. The faith in Opeth is my favorite kind, familiarly alien and most importantly distant. The only effective authority in Opeth is moral but THAT is crumbling, faltering, poisoned from within. And from my very first D&D session I ever ran to my favorite One Page Dungeons to my favorite HPL story it's got my favorite go-to axle to spin a plot on. Seriously I spent a lot of work on a screenplay that I wish read as promising as this.

This world is inhabited, and by more than it appears. Allusion is made to a selection process to which we're not privy, political structures we only glimpse fearsome shadow of, threats we can barely conceive which are only obliquely referenced. Apart from their scale, the most important thing about these. Glimpses like these are important to leave as Tygers ot Dragyns in the blank space of your map so that they can be filled in or ignored as needed. This isn't a game about a not-god or an inquisition, it merely touches those like the points of a pentacle. That's LIFE. People do things in this book not because they are PC schemes or because they are under specific direction or programming. If anything this book is about the scrambling of the human signal. Instead people behave in this book as humans would, weak and desperate humans. They may even know their efforts will be in vain. The musical sting they used in the trailer for the original Wicker Man? There's about a dozen moments in these 30 pages that evoke that sound, that weight, that moment when the long Tetris brick slots into place.

If I sounded like I was picking on the art in here let me disabuse you of that notion: what's here is very effective, especially the grace note insets, but the full-page collages are just arresting. Nobody that I'm aware of is doing anything like it in self publishing, which means it's the best thing to do. This release coincides with a new edition of Over The Edge that I don't quite understand but just so you know, Atlas, this is what the art in OTE should have been last time. Think about it for this current release. Also these are good maps. I am...not great at appreciating cartography but I am growing increasingly fond of clean space in a game text and effective mapping. I'm not good at it, and I appreciate most things I am not good at.

I'm not good at talking about something without having to insert myself into the subject to steal some life force for my own atrophied importance but I stress again - I am so glad of this book because I'm bothered I didn't do any of these ideas first, think of them at all!.... One of my definitions of a great work, not a good or useful work which are superior to 'greatness' (and this is also good and useful), but a GREAT work inspires you to work. Immediately. I'm mostly annoyed at this book right now because instead of running off and working on something RIGHT NOW I had to spend that time instead telling you how much I enjoyed it.

This isn't going to cost you much more than the latest Deadpool and it's something you're going to be happier with in a month's time.

I make the things I make because I can't help it. To have something that scratches that itch without me having to tire myself out is a huge fucking balm.

Faux-Pas from Hocus Team is $4USD and you can buy it here.
Posted by Daniel Dean at 9:43 PM

Email ThisBlogThis!Share to TwitterShare to FacebookShare to Pinterest
Labels: I Do Reviews Now? 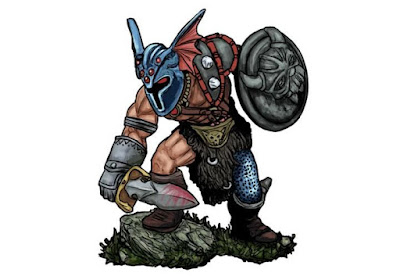 You are -2 to saves against Wands/Devices, or against spells contained in an item or triggered by a trap.

You always detect as Chaotic.

You have a set of armor (or shield, if you like) and a weapon chosen from the standard list. These are always considered magic items for you while you possess them. They only work for you, and you can never use other magic items, including potions and scrolls.

You may have as many Enemies as you have HD and when one Enemy is dispatched you may choose another. Enemies are not creature types but specific individuals. Enemy spells not designed to deplete Hit Points always automatically succeed on you. However, you always automatically do critical hit damage on an Enemy.

Whenever you slay an Enemy or have defeated them to the DM's satisfaction your weapon or armor gains an investure of power, keepsake of your victory. You may have a number of powers equal to your magic item bonus for your weapon and armor, but your DM determines both the effect and which item it must be infused into. You always have the choice of keeping your existing powers instead of taking the DM's new offer. You can use your powers a number of times per day equal to your level.

When you are reduced to 0HP or less you may instead roll one or more of your Bonus HD. You gain that many HP from 0 and are back in the saddle. You can't use these to heal in any other manner but any spell effects that depend on your number of HD do take these into account.

At level 9 you may swear yourself to the service of a lord, kingdom, goddess, or demon. You never get to build your own domain but you get the full run of this one, with authority second only to your liege.

You can raise an army of followers at any time; in fact, you only gain XP from treasure spent on building and maintaining your army.