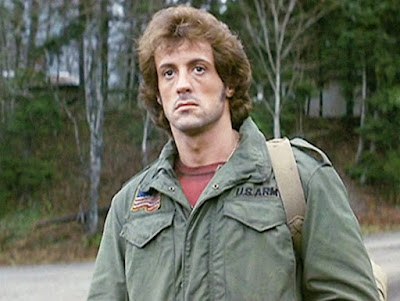 We're going to make a Ranger I feel like playing. This is an American Ranger.

First of all, let's get a new fighting style just for rangers.

You do not have claws and shit. Instead you are considered proficient with improvised weapons but you cannot do damage with them. Instead you may create makeshift traps and weapons using the surrounding environment. A successful attack with these allows you to impose the Blinded, Deafened, Prone, or Restrained condition on the target of your attack for 1 round.

My rangers don't get spells. They can get them at level 3 as a class option, the same way they can get a wolf friend or extra murder power, and the same way fighters and thieves can get spells. You have to pick. I know Bobby S. didn't have to pick when he made Purple Rain: Fanciest Spider Boy but hey that's a book and also I don't care. Take a wizard level.


The Back Of Your Hand

At level 3 you double your proficiency bonus when tracking your own allies, even without regard to bonuses from Favored Enemy or Natural Explorer. However, within your favored terrain you know the distance and direction of your allies for 500' x your ranger level

At level 9 you can use your reaction or a bonus action on your turn to allow an ally to make a save against the Charmed, Frightened, Stunned, Grappled, or Restrained condition. This can be explained as offering words of wisdom, throwing an ally a timely dagger to aid their escape, coaching them on the time to shift their weight, etc. They may do this multiple times in a round but may only do so a number of times equal to their Wisdom bonus. This ability refreshes after a short or long rest.

At level 13 if you so choose whenever you make a Charisma roll to obtain information from an individual (or about an individual) you can force the subject of your check to make an Intelligence save. If they fail the save then they have heard of you, or heard something about you, and you get to decide what it is.

You are so invigorated by the beginning of a hunt, the preparation for a mission, that pain cannot catch you, the stone cannot cut you. You gain half your max HP in temporary hit points. While you still have temporary hit points you can elect to roll 1d10 after a successful hit, reducing your THP by that amount and dealing that amount in bonus damage.
Posted by Daniel Dean at 11:07 PM