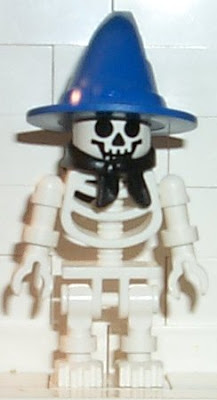 Ability Score Bonuses: Strength +1, Intelligence +1
Size: M
Speed: 30'
Languages: Common, 2 of your choice.
Living: If you remain silent, observers must pass a Perception check equal to your Charisma Score+Constitution Bonus to distinguish you from an undead. Turn Undead has no effect on you.
Skeleton: You are trained in Intimidate. If attempting to blend in with other skeletons, consider yourself trained in Performance.
Clacking: Your Passive Perception for seeing things is -4. Your Passive Perception for hearing things is +4. In a round where you spend a bonus action chattering your teeth to echolocate, you negate both of these modifiers.
Incense: You have proficiency with Herbalism Kits and may treat as a Healer's Kit.
Blood of Carcosa: You have been trained from birth in the blooded rituals of Carcosa. At the following character levels, you may cast each of these spells once per day, as rituals. You must finish a long rest to use these rituals again, unless you have Spellcasting as a class feature or the Ritual Caster feat.


All Bone Men are either Warriors or Maguses.

Warrior: You have proficiency with the Greatsword. Additionally, you may use a Greatsword coated in blood as an Arcane Focus.

Magus: You learn the cantrip chill touch, with no components but at a range of Touch. Additionally, you also learn the following rituals at later character levels:


* casting feign death on a target gives them the appearance of Bone Men.
Posted by Daniel Dean at 10:55 AM