I Lost and Forgot This Lost Forgotten Dungeon 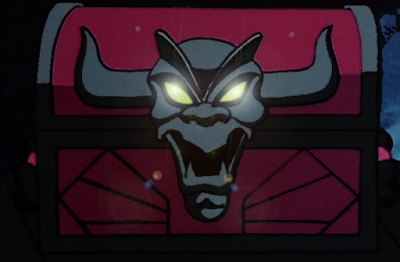 Long ago the party was rattling around the dwarf cliffs day-deep in a town called Skorkida. There's really one dwarf kingdom, one dwarf city, in a way, and the individual city states are more like boroughs. They were sort of in a...dicey position, legally, for reasons I'll gloss over, and wanted to ingratiate themselves to the locals a bit more by exploring this structure the dwarfs discovered. Some dwarfs intruded into the tunnels belonging to another clan and found this system of chambers, and it had to be mapped by impartial outsiders to settle whether right of salvage and discovery belonged to the tunnel owners or the intruders.

Anyway. I had an idea for a dungeon gag I wanted to use, so I decided that's what this was. A 'monsterless' dungeon where all the dangers were from doors or chests.

First I made this table:

1. smiling chest, must tell a joke to make the chest laugh or it bursts into flame, Breath-dex save or 1d12
2. skull chest, covered in poison, do not touch this chest
3. tooth chest, unlocking this steel maw puts metal jaws in place of character's mouth, save vs spell or bite 1d6 uncontrollably
4. bear chest, contains a folding bear, as grizzly bear but can collapse small enough to fit in a 1' cubed space.
5. steam chest, 60' radius scalding trap 2d8
6. bat chest, makes everything invisible visible in room until unlocked
7. crimson chest, fills room with blood when opened, like a Shining elevator amount of blood
8. nesting chest, 3d6 chests within chests
9. inscribed chest, reading it casts as from scroll, "and then i found myself inside the chest." Inscription is in a language at least one character can read, if you read the message you vanish and appear inside the chest, even if there's not actually room in there because it's full of guys....
10. chasing chest, covered in spikes and floats after party once observed
11. beckoning chest, first draws adventurers, then draws monsters 4/6 wandering checks each round
12. eye chest, can only be picked open by invisible person
13. bird chest, filled with eggs (cockatrice)
14. sphinx chest, must answer riddle to open (riddle: We're green with no gills, lizards with no frills, scaly but no snake, rhyme for the riddle's sake. Answer: skinks.)
15. many-locked chest, fucking covered in them. 10% to open and 10% to activate spike trap, raise both by 10% for each attempt. Spike trap does 3 damage +1 for each failed attempt +1 for each spike already set off.
16. snake chest, charms someone failing to unlock it into attacking party, they may wait until they can get sneak attack damage. No save, successfully unlocking the chest is your save
17. growing chest, occurs naturally in a tree, home of cursing sprites (all party members failing saves become incapable of seeing, hearing, or in any way perceiving another party member, like even if they write a note or carry around a potted plant)
18. tiny chest, unlocks hidden door nearby
19. shadow chest, can only be unlocked using the shadow of thieves' tools, always has Shadow cast on it (Oh right uh I turned a lot of BX monsters into spell effects and living shadows was one of the obvious candidates, so the chest's shadow can animate and try and eat your shadow and replace it, and then move on to another shadow, when your new shadow leaves it kills you, if attacked treat like normal living shadow)
20. displacer chest, must be truly found to be unlocked, as searching for secret doors
21. illusion chest, disguised as creature
22. night chest, only exists in the dark
23. getaway chest, contains stairs that lead to escape, portable. Stairs terminate in a sylvan glade far from here and vanish when you step off of them
24. mirror chest, reverse treasure roll for chest (5% becomes 95% etc.), unlocking will just lock and jam further, so you have to try to lock it securely before you open it
25. wax chest, touching it causes one to adhere to it, may save vs Petrification to escape, 3 failed saves means it's stuck on there until Remove Curse but you can do d8 damage with it
26. pandora chest, fills he who opens it with unshakable hope and aspiration, save and this effect wanes in d6 rounds and is infectious (no save), failed save means the effect takes root until shaken by a Command, Remove Curse, Fear effect, something that makes sense...
27. haunted chest, 3rd level spellcaster, counts as ghoul for turn undead
28. reliquary chest, soul trapped in chest
29. curse chest, 1d2 mutations
30. heart chest, as love potion, mirror inside, save to avoid narcissism, if you save you just love whatever is directly behind you. If they break it to you harshly and break your heart then the effect ends but for the next week you have to make Morale checks in battle with Morale 7.

There were no Mimics exactly. There were chest golems (as wood golems but with chests for uh, chests, so a successful unlock check killed them) everywhere and many of the doors, in addition to being trapped or locked, were Shrieking Doors. The Shrieking Door was one of the very first rpg things I made and my answer to hating the ear borer. How to accomplish the same thing without being a shitty player punisher? ac5, 2+hd*, 12hp, sonic attack does 1d4 and deafens plus after 1 round it will rip itself from its hinges and totter after you with a 1d8 crushing attack, no loot or language, roll for wandering monsters every round until killed. Like the chest golems above, you can incapacitate them with a successful unlocking check.

Door to 14 trapped(pit, 2d10)
Door to 19 trapped(needle, save vs poison or sleep for 24hrs), locked, shrieking
Door to 10 trapped (polymorph the PC into a chest mimic)

room 8 manylock chest x2 (key to 2nd chest contained in 1st, key to 9 door in 2nd)
room 6 crimson chest
room 10 night chest (time travel, everyone in the room transported to same room right before the party enters the dungeon) and snake chest (containing valuable dwarf mummy)
room 13 eye chest (diary of nearby secrets) and bat chest (key to 14)
room 19 curse chest (contained gauntlets, also cursed, each containing spirit of dwarf brother, +1 AC but you have to make Wisdom save to do anything with them because the brothers fight)
room 3 inscribed chest (OK this was inscribed in dwarf obviously and this terrified my players like few other things. They kept sending their dwarven retainers to read it but in short (heh) order the chest was so full of crushed dwarf it began extruding their gore through the seals of the chest)
room 7 reliquary chest (Blacksmith, the opposite number to the Craftsman. (Oh right the dwarf holy wars, uh don't worry about this just imagine it like the black chests from Paper Mario. The short (still funny) of it is that dwarf faith was very forceful, the Craftsman represented force of will to be meticulous and persevere, the Blacksmith represented force of effort and strength and pressure, the party never met Force of Personality....)
room 4 heart chest
room 18 nesting chest (key to 11 in smallest chest)
room 15 bird chest

This represented some challenges. Getting through all the unlocking in room 8 was a potentially daunting prospect, room 13 was basically made to make things difficult...in play, pretty much everything terrible happened which could. Everything was failed.

There were some timetable elements I didn't recall, like so:

If PCs take 1 day to get up in the dungeon, ghost awakens (silent, looped actions like Speed, slowly draws party toward 11)
If PCs take 2 days, 36 kobolds invade and set up shop
If PCs take 3 days, rat-dwarves invade and force kobolds into inner rooms. These are ratmen but dwarves so they can outmaneuver you in tunnels easier.

The party ended up getting through to room 11 on their own, which subjected them to illusory flashes of the past, PCs taking on different roles in the dwarf holy war. They came to in the midst of a room filled with mummified and petrified offerings, treasure type H, stone statues which looked hungry and terrified, braziers on dais which must be lit before the stone crypt is opened. Black pudding inside, PCs hit who survive suffer as potion of madness until dispelled, lose all gear carried. The pudding moved at full speed 120/30, and I added two* for XP. The party was luckily smart enough to light the braziers, which meant the old god did not crawl from its crypt but did speak to the minds of all, casting a powerful Fear on the room.

It has been a while but I know a lot of people failed the pudding fear, the snake chest ensnared the crocodile man with the wand of fireball, the mutant chest went off, and the party just generally got its ass kicked. I've been meaning to run something like it again lately...maybe for the monthly 5e game....I had completely forgotten all this notes were on this old laptop.
Posted by Daniel Dean at 4:08 PM