REVIEW: Lain to Rest At Last, At Last, by Bloom Rose and Steve Olsen 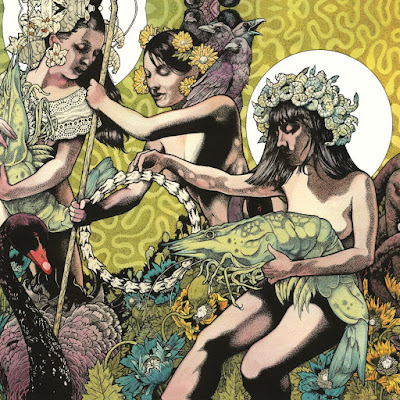 No one must know.

When Big Screamin' Andrew died his hellish drop, Andrew William James, popped the freshness seal on his medulla. Without the James sire to lean on and fall back on, Adder Entertainment was truly all this addle-pated addict had going for him, and Adder was by then beset by the buzzards. Spunj, AWJ's magnum opus of procedural relationships told through evolutionary leaps, where the characters played psionic non-motile sea life, had just pulled quite the Cosby after James' clever idea of designing the expensive hardcover (filled with educational color plates, true) after his high school biology textbook got them in a little hot water. A Newfoundland school board had received a case in error and distributed them. The backlash was laughed off by the community apart from resulting in a little more Newfie discrimination than normal for a week, but it was a deathblow to planned expansions for the line. People: this game was so lame, it wasn't even cool enough for schools. Canadian schools.

Æ was definitely about to go bankrupt. When those books were opened, James' embezzlement would be apparent, his drug use would be found out, lawsuits, jail time...He did the only sensible thing he could, which was to blame the whole thing on Bloom Rose, the last of the old guard and his biggest rival within the company. His conscience appeased, he started a big ol' fire.

When you are hiding your drugs and prostitutes with a warehouse fire you are probably not a detail oriented person...

Little gets written about Steve Olsen. Stooge impersonator and Stooge cover artist Steve Olsen was a valued member of the Æ typesetting pool and holder of the inter-office Doom high score. He was also a shadow photographer, taking stills of the discoloration in cheap paint and old wallpaper created by harsh light and conspicuous obstacles. Because he worked cheap and studio space was hard to come by, he had many installations in progress around the Æ offices and warehouse. Eccentric decorations to a fairly staid office job. Not thought of by many, and, as a consequence, Steve Olsen was also not thought of.

Lain to Rest At Last, At Last opens, controversially, with a photograph of the place where Bloom Rose burned.

She of course knew Steve Olsen was inside. She had given him the key and her leave. She knew the financial records, the projects which might help raise them from bankruptcy, evidence of the criminal acts she suspected, all had to be inside the burning structure, TRUE, but first she had to help Steve Olsen.

A company laptop found in her apartment had the detritus and the Kubla Khans of decades backed up onto it. It's these documents that Steve Olsen and editor Marna Grisby combed through to form the blue octavo notebook that is Lain to Rest At Last, At Last. It is a document unique: an artist eulogizing herself with the greatest hits she never had. The accompanying pieces by Steve Olsen are, to be sure, non-traditional compared with Æ's other artistic output in their expedition journals, but they do lend the whole proceeding a somber, memorial tone like a true crime novel or a trashy pictorial of Princess Di's headless body.

There is a Mega Man approach to the dream state of faerie nation the players find themselves in. The order in which you proceed through the hills and thickets affects what happens next. There are fourteen vignettes in all, not counting the Belle Damme Sans Merci framing device. I'll address each in the order they appear.
The flickers are never named explicitly but there's nobody who missed Steve Olsen's intent. This means that there are actually two "ideal" pathways through the cemetery hills, one in which all the flickers escape and one in which none do. I'm all for symbolism and bullshit but I have no idea who the people championing the second one are, SURELY I could just feel depressed on my own and save three hours of my life.

There are movies where this would save the company and everyone would remember her legacy and dedicate everything to Bloom and Æ would reach greater heights starring Tommy Lee Jones for some reason, but nope. Losing all assets and all records of all assets was hard to come back from. Æ shut its doors officially shortly after James' trial concluded, and Lain to Rest At Last, At Last was one of the final things to ship. (The last product of the Æ era, of course, was Wurming Places, an A Tunnel compilation and itself a fitting cap to Bloom's legacy.)

These trickled out a little more slowly because I've been going through some shit and the Bloom Rose sequence demands a little more than my normal reviews. There's a lot to fact check and cross reference so I can present an accurate picture behind the scenes and a mostly cohesive timeline. It's also just more draining than normal because of how inextricably tied these books are to not the rest of Bloom Rose's bibliography but the rest of her biography, and the sad way in which she died, gaming's sainted grand dame.

We all know now that Æ's story was far from over at this point, and I do promise to get into some of those latter day Second Age releases, but first I'm going to backtrack to some other old school favorites, including some of Æ's stranger dalliances with other popular rpg genres. There are a few in partial draft form I know I want to finish off before the end of the year, for example, in particular Ezra Nudibranch's Know Fist.

I do think the individual books in the Bloom Rose sequence play well but the informal fan grouping of them suggests an over-arc which just isn't there at the table. In that respect the sequence is one of those rarest things, a game series which is both good and actually reads better than it plays.

Lain to Rest At Last, At Last, in particular, is the kind of experience other people would found whole gaming genres trying to recreate, and the fact that it both HAS monsters (in the house/the house) and doesn't give a fuck about having monsters seems a decidedly modern flourish compared to the toothy gauntlets Æ was known for at its height. The Sixth Cycle of Cyclopean Romanse and Steve Olsen found one another, and in a strange way were the best things that could have happened to one another. Meanwhile, Bloom's lack of estate has led to some legal complications with reprinting much of her work outside of A Tunnel. Instead, Æ turns a willfully ignorant eye toward the rampant torrenting and bootlegging of her other vital contributions. In fact, a few booths at Gen Con this year were circulating the Elephant, an ivory-covered compilation of Bloom's work featuring some new illustrations which first appeared somewhere in Oregon two years ago and rose to fame after that Patton Oswalt AV Club article.

Next up: something really fun.
Posted by Daniel Dean at 12:07 AM