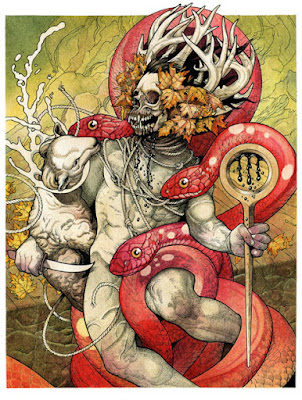 The Adder Entertainment Tattoo Society were out in force at this year's GenCon, as usual, bringing multiple hotels to a screeching halt with their elevator revenge schemes. You wouldn't know it to hear what is laughably called the gaming press; however, Raven got caught in a stairwell during the siege and saw some of the responders from the fire station. If only he hadn't been sidelined because one of the arrests this year was someone I was pretty sure had washed his hands of Æ altogether: two time (and sole male, and sole individual) holder of the women's tag team belt from the Continental Wrestling Association and once hailed apocalypse messiah Duggan "Guapo" Esperanza.

To say that the Satanic Panic in all respects in the American 70s and early 80s was overblown nonsense would be both accurate and yet inaccurate in the scope of how fucking accurate it would be. To say that there was a lot of hand-wringing and panic as the millennium dawned (for people who suck at math), be it from the doom of our own technology destroying us or God on high smoting us aflame would, again, be correct but woefully insufficient to convey the madness. These panics had a bit of synergy with the doomsday cult that rose when Adder Entertainment reincorporated on the eve of the destruction of all things. Surely this was the heralding message of end times and must be heeded as hosannas on high. That was the theory amongst a lot of poor crazies and bridesmaids to Columbine, and nowhere did this take hold stronger than the Tattoo Society. For like three years there, until Gemma Fatale took over, the Society was synonymous with "dangerous laughing stock," a description which covers Guapo pretty well now that I think about it.

The idea with the birth of the second age was to find people who not only never had made game content before but never would unless...coerced. Riverboat smuggler and the People's Comptroller after his star fell in the ring (after chewing tobacco took his jaw and throat he wasn't much of a "face" and certainly less Guapo, so WCW decided to pass on his bid), Guapo was the child of an Argentinian Nazi and a Colombian coca girl. Æ pinged him on their radar thanks to an unintelligible but moving speech he delivered at a Wrigley Field flag retirement ceremony. The event did not specify from which side of the war they were seeking sons of veterans...

A trial internship blossomed into Guapo's position as the Æ forums' first SYSOP. The animal musk between he and the Tattoo Society was immediate and obvious.

Working alongside Odell Jefferson, Guapo was tapped to help fill out the third wave quartet for Æ's new catalog. Queenwood Gambol is basically the kind of gift that the Corvette Stingray or Plan 9 From Outer Space are: so of its time that whether it's good or bad is almost immaterial. It's a completely closed system, a short story about mountain lions screamed through graph paper from the distance of a 20-year-old concussion. The thing is a dissertation against Guapo's own origin story and the spheres of influence exerted by the Dancer castigate, in turn, white supremacy, banana republics, action movie style 80s corporate excess, religious persecution, and some Captain Planet shit around the corners.

The Dancer has been seen for three nights. With him has come the usual tokens of demonic influence - black-blighted crops, less animals, MORE animals, a foetid stink, a blush of ruinous lasciviousness. Hunt and end him. But within the wood there are a dozen glamour traps and weird nihilistic whorls of Titania and Escobar.

This is the kind of entire adventure that the current creative collective would reproduce in, say, 20 or so hexes as part of a much larger crawl. That's not itself a knock on the content of the adventure, just to say that the framing context to kick off the adventure is minimal enough that even plonking it down and luring your players to it is an odd bet. More likely this was a "I bought this so we're playing this" kind of purchase. There's not an investment to be had beyond what so many video game RPGs are guilty of: look boy, content, go grind through it, go get it, good boy, sic em. I don't even think it would be improved as something of a random encounter sort of setup...this thing cries out to be part of a larger work but as one of the venerated Æ tradition of One Hit Wonders that would never be.

The Okenlady is divided into "spheres of influence" laid out loosely over a grid. Most of these circles are laid out as subsets of one another, with three large circles intersecting the others. If you are in an undisturbed diamond you'll roll for a result for that space like normal. If you are in a sphere which the Dancer has just left, you roll on a different table. Same for if you are in a sphere that overlaps with one the Dancer is in, or if the Dancer moves into your sphere on its round. Only by moving deliberately to the sphere in which the Dancer currently operates do you face it head on.

The Dancer moves spheres of influence three times in the night and then he's gone. It's up to the person running whether the Dancer is avoiding the party, crashing after them, or whether its movements are random or unconcerned with the party's place. The longer it takes to defeat him the lower his defenses are, so the easier it is to defeat him in theory. In practice there are usually still a lot of forest hazards and monstrous coterie to contend with each night, so it has a gradual cheese grater effect on a group unable to fully rest up before night falls again and the dance begins anew.

There are a lot of bog standard enemy types here, approaching gonzo-random-dungeon levels, but they aren't collected here for an archplot reason or united in this cam-pak by their unique-to-this-setting abilities. Instead they are unique in their experiences. See whatever "phase" of the dance you're in affects now just what you encounter but what that creature has been through. Eyes in the dark. Starving and lurching from fires. The mass graves. This stuff hangs on them like armor, in that you're meant to read this stuff out during the players' rounds, overloading them with atmospheric information and being signal noise for their actions and plans. Sometimes getting sympathy. Then they either strike boldly to a beast or just...wander off and suffer more in the night.

This is how it's meant to work. In practice, no it doesn't. Everyone politely waits for you to stop speaking and then they try to backstab it.

There is also the DELIGHTFUL mechanic that betrays Guapo's CV, collecting the faces of all the creatures in Okenlady after you defeat them in order to display your power.

After the apocalypse didn't happen a lot of wind went out of the doomsday cult, and after 11/9 happened a lot of the dark side of the hobby expatriated along with Guapo. I understand he's in a military prison after the GenCon arrest so that''s nnnnneat. Thank fuck Gemma Fatale came along when she did...Guapo himself seems to have had quite the underwhelming interim, serving as of all things a chiropractic therapist (unlicensed: those fools called him mad, MAD). It remains to be seen what else will come to light, how this story will end.

Queenwood Gambol is a lesser effort from Adder Entertainment and it's hard to judge it outside of its own spectrum. Archaic and often even offensive by today's standards, it was still forward thinking in both ethos and design by the standards of Guapo's generation. If it's a sinner it's only of omission, and if it's a saint it's only for the virtue of being impossible to describe as "mediocre."
Posted by Daniel Dean at 1:26 AM