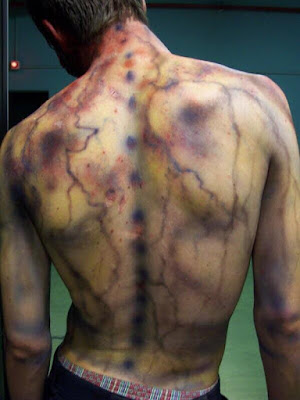 Otch's tiny jungles are thin and frail, a jungleshadow. Its animals are fearful, subterranean, hardened, busy; predation is staggered but brutally desperate. Its villages are made of stone, hugging close to the ground. Many Otch live in shallow caves cowering alongside all manner of creature.

The bravest and hardiest souls are the fisherman. Leaving Otch is treacherous and one must travel far from her to find good fishing. Returning to Otch, one takes their life into their hands. Every trip. Every day. On the rocky coast of Otch, long ago scoured of beach, the Otch endanger themselves watching for the return of a lifeline which may never come. The fishers hopefully bring not only the sea's bounty but the harvest of distant lands, bartered from passing vessels. Beasts are had for the hunt on Otch but not many. There are crops on Otch but not many. They shield their eyes and hold their shoulders and watch the darkening skies wondering if the fishers they await have become only the latest Otch to abandon their homeland for asylum and a life of stillness and birdsong.

Otch is not a very large island but huddled though its people are there is a place they will not go. There, enormous wooden pylons older than most nations jut from the ground at odd angles. Stand here and they seem like a great web. Stand here and they resemble an explosion. Stand there and they are like a map of some star system...not that the Otch not fishers know much of the stars. Here the good days are fitted with a hazy damp. Here at midday it is always dusk, unless it is night. Great mosses dressing the massive wooden markers swing and whip wildly in the elevated winds. Thick, rooty vines stuck fast thrum the air like a power chord at all times. It's the music of Otch, the only music they know apart from fear songs: shaky lullabies in the starlessness, song against the music of Otch, assurances to those too young to understand that reprieve is...not Otch. In the air so warm, where the winds can still freeze you to death if you're not careful.

The structure at the heart of Otch stands, bowing slightly but forever unbroken, petrified against a thousand thunderheads, grinding on without moving parts. The Kaffakaffanak is a squall engine, set here by some dispassionate god to a purpose lost longer than He, or else erected by some actively malicious mind as a scourge against all seas. Otch is where the storms are born.

Therefore the Aching Peoples are born there, too.

Most of the Achers are fishers who abandoned their people to their hellish lives. Some are those persons unlucky enough to be swept from the island in a great wave while still lucky enough to be rescued by a passing trawler. A very few are the heartbroken souls who left Otch only on the most urgent of emergencies and found themselves not strong enough to return.

Have you ever been truly alone as a man in the sea? Every tide is older than anything else. Its reaches are more powerful than any magic. Its churning is unrelenting and even a calm sea will wash to bone if given the time. It stretches so close to forever that the distinction is academic. We stroll down cobbles and cower in towers and forget that the sea is as deadly, dark, and alone as anything that waits beyond the sky, as any blasted hellscape, except also it is full of monsters. We build our fragile little huts far from shore forgetting, as it is easy to do, that they sky is itself a sea, of the same humour and the same character. They are in fact one thing. We are everyone drowning.

This is easy to forget until it is not. Until a great storm wells up and the sky rolls and crashes and swirls. The Otch never forget. Theirs is the blood of all seas.

An Otch with the wind in his hair can find his way in the blind dark, in a cloud of ash, in a storm of world ending. The Otch do not know calm: on a still and bright day they remain tensed like a bowstring, their brined of impurities like driftwood, their minds swept clear of all distraction. As Otch do not know life without storm on Otch they ready always for the storm coming. Within the storm they are
well, lions.

Against the rain and sleet they have a quickness demanded by survival. As the lightning races so do their minds, one step ahead of the storm anticipating its dangers. Thunder deafens their fellows and scatters their servants while the Achers stand fast: they have felt this storm from hours out and now that she is here they draw heart and life from its boom howl lash crack. The have learned how to run and leap from the wind himself. Their sight is made keen against a stone of lifetime fog.

When snow falls their skin is like a cauldron. When all your living breath is stolen the Aching Otch simply sits calmly, breathless, and waits for it to return.

What they cannot know, bygone even to the ancients, is that Kaffakaffanak calls them home. It draws them together in a fist of atmosphere to hold them close, to love them. The Otch cannot know this, and so they live in suffering, and so many leave. The more who leave and the longer they stay away the tighter the Fingers of Kaffakaffanak close around the sky. The more the Otch ache. The more the Otch leave. One day Otch will be emptied and all the skies of the world will be filled with