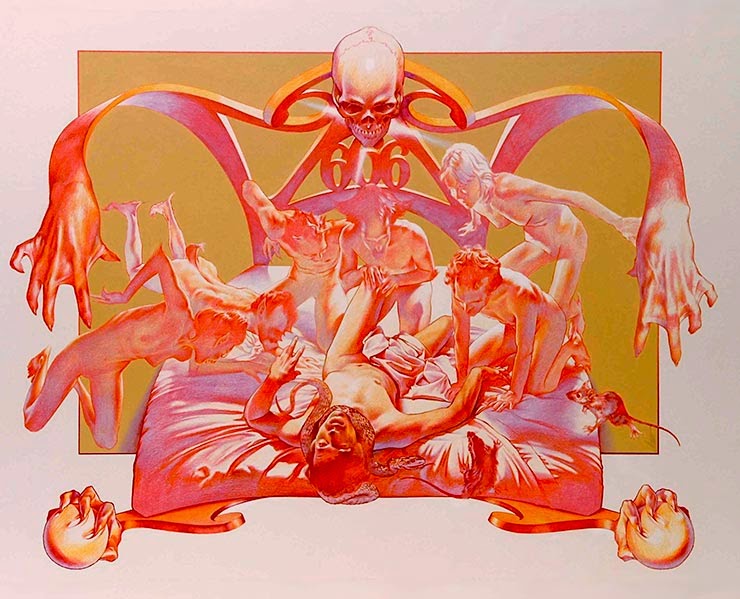 In the fields of Kenning Downs the shirtless young men step over busted and rusted sickles to get at the lush September crop, gorging themselves on stalks of wheat down to the roots. They do not stop. Gotta get the harvest in. In the churchyard disheveled, mostly clothed peasants paw and writhe absently against the walls of the chapel, moaning through the gardens, and the language here is fairly circuitous but I'm pretty sure they're dry-humping the tombstones. In the square at Kenning Downs several cats are being hanged.

Fist artist and truckosaurus pioneer Noel Station had the honor of producing the first Ice book, Paradise Cleft, though the manuscript was actually kicking from desk to desk during much of the Rust period. It's no surprise this entry was a hot potato given the Satanic Panic that had taken a country afraid of the vitamin-d deficient's use of graph paper and whipped it into a movement, and movement is definitely the word since I conduct a similar movement a few times a day. This chapbook, originally titled A Witch in the Sheets but named more conservatively (if you can call a pussy joke racked next to Toon conservative) upon release, wasn't exactly a reaction to that madness but its release was received as a kind of line in the sand. Reading it, however, reveals an almost tame adventure by the standards set by other Adder Entertainment releases. If it can be said to have a position on the Satanic Panic at all it is one of clarification: "You know we're pretending to FIGHT demons with the power of PRAYERS, right?"

Corridors of beige space and unfocused fireworks make a man like Noel Station. Astronomer in Cairo, drunk in Barcelona, lounge singer in Georgias, first Soviet then Southern. Noel Station never found an overriding passion of his own. He found other people's and half-bricked them in the head, taking just enough to get by and then running into the night. Interestingly considering how ecclesiastical this book reads in places its composition did seem the impetus for a brief blood cult tourism period for Station before he found his true calling in dying of leprosy.

The adventure follows a fairly basic premise: the Seven Sacred Sins (here Murder, Devil Worship, Lust, Theft, Pride, Waste, and Betrayal) all occur simultaneously in Kenning Downs. Some of this is innocent, some required coercion from a third party named Nicod, but all of it happens, and it opens up a kind of door within the village. No one can stop themselves. There is nothing between thought and action. It is possible to reseal the barbarism within the people and end the shifting shapes of the town and the creatures who claw from the edges, but that requires venturing deep into the crypts of the town in search of The Sword of So Cool It Would Not Be In Such A Shitty Town Buried Under Ground If This Weren't A Module. And some of them have been let in already, where they hide amongst the desecrated dead and flaming shadows.

Paradise Cleft isn't inspired, I don't think, apart from the vague sense of transgression and rebellion many who purchased this book experienced vicariously. It isn't adventurous, part from boldly having more than one idea, which is more than many modules even attempt.

Nicod appeared in the Æ miniature line as some kind of platonic philospher figure whose robe ends and reveals some seemingly-too-small-to-support-him raccoon legs and tail. None of this is spelled out in the text and that is a damn shame. I wonder what else has weird legs? Oh shit new blog tagline...

The book would be so exciting if you could hate it. If it represented squandered idea after half-premise and gave you only stilted Friday Afternoon Art and a map from a file. Those are some of the great treasures of this hobby, the interchangeable melange of the ungood-enough. How riveting a product would this be if it actually moved you, pushed some buttons, made you ill, or turned you on? How frightening if it were actually great? Instead it turns out that all hell on earth amounts to yet again is some Yakov Smirnoff reversals and a lightning round of Who's Got My Come? Even if the banality of evil was its subject that would at least be an argument.

It's interesting, sure, but almost entirely as a historical document at this point. I wish there was a world where this set a new standard in adventure design or at least sucked as bad as FATAL. Instead we get normal old suckworld, which is the ultimate legacy of Station and maybe his big joke on us all.
Posted by Daniel Dean at 1:00 AM