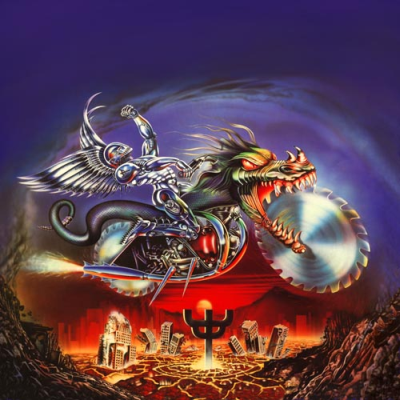 IVANOV. Say it loud and there's music playing, say it soft and it's almost like praying.

I met Tucker Baine once and, being polite, did my best to avoid the subject of Nuke Year Holocaust, her only contribution to the Adder Entertainment catalog. There was a world before machines who could mutate and have Tod Browning babies. It was full of ethnic cleansing and Jimmy Carter. That's fine and all but I prefer the world where you begin the game with a plug for a face, interface with computers by smashing your face into them, you have tank feet, chainsaw hands, and then roll for mutations. Get out of here with your lizard people or walking plants or Sean Young PCs. I refuse to choose one of those because we live in a world where I can be all at once. This game took longer to adjudicate than Champions but was a billion times more fun, each session taking place simultaneously on the psychic plane, "compu-space," the flickering and transforming physical world, and Hell, realm of magic space witches.

Her hands were shaking, making fists again and again, and she told me about her post-Æ career. Ghostwriting Rick Veitch. The acid bomb. The Altamont séance. The empty casket and the New York Marathon. Tucker Baine was a Changesone of a woman, reciting her own greatest hits to a snob who knew already. Who's grateful just to stand next to a comet, to hear a unicorn.

I remember my first Nuke Year Holocaust PC the way some people remember the dim orange light filtering through a railroad bridge as she whispered, "Put it in." His name was Cuntastic Fuckosaurus and he was a werewolfman who could turn into a living music video. Into the Cave of Cannibals went we undaunted, in the buff, on fire, eleven though a grown ass man. I never stood a chance. Neither did the ragged peoploids.

I'd never ovulated before.

"Do you know what peyote is? Ivanov did. Ivanov had a key to the county library. Ivanov had pictures of museum security's boyfriend. Ivanov showed up when Adder  still printed chess strategy, ready to intern in layouts. Six years later he turned up again and had done everything we saw in Nuke Year Holocaust and the cover for nearly every AT (A Tunnel) for the next three years."

In addition to character creation rules and some dice the honeycomb box came with three prepared adventures. One was simply a conversion of Under the King that was written in the sense that there wasn't a Find/Replace utility at hand, Cave of Cannibals. One was Tucker Baine's environmental horror story of classism as pollution and venereal Zen Buddhism, Pax Throbbinaut. Hemophiliacs appeasing the burning skyscrapers. Cry the ghost daughter. Riddle of a bass guitar.

The third adventure was at least 59 adventures to date.

"He said he had an adventure to add, and he turned in one of Duke (Caine)'s manuscripts. Bloom loved it, said let's get it into production...We ended up releasing The Killing Flowers separately because Ivanov changed the game on us. He didn't print or copy any of his adventures. They were all done by hand, hundreds of copies of the same adventure, but he had at least thirty or so, I think." This was a few years ago. Since then even more 'Nukes' have been discovered. Separately they go for hundreds, and a complete honeycomb box is worth a couple thousand intact, upwards of 40k unopened. It has attained a coolness cache of its own, independent of the hobby. Charles Barkley had one and he doesn't even know there's such a thing as dice you can't lose your savings with.

The Nukes are eight to twelve pages, always hand drawn, always different, and contain little in the way of actual script or game information. Or text. Aficianados call these by names taken from the remarkable and rare scribbled note in the margins. Cow 2000. Qui Bono. YOU GO HERE.

I didn't stand a chance. "He must have broken into the warehouse..." Her hands are still. Tucker Blaine is lying.

Nuke Year Holocaust was a generation. Both the Æ miniature line and Entombed! featured Killboner, patron saint of "Dude have you seen this new bong I am so wasted" everywhere, who would represent the ultimate salvagable product identity from the ashes of Adder Entertainment if Ivanov hadn't signed over copyright to the bees.

Adder Entertainment put out only three official expansions for Nuke Year Holocaust: the aforementioned The Killing Flowers, Young Planet Coming, and the article "Deep Ocean Trench Holocaust" from A Tunnel v.2 #1. There was some commotion last year when, despite the legal problems surrounding Æ's catalog and NYH specifically, a Kickstarter went up for a second edition. The video was just someone's YouTube upload of Shame on a Nigga and the rewards were written in Christopher Walken magnetic poetry. It was removed on a terms of service issue after 31 hours.

But are you okay, I asked.

"I haven't been okay since Bloom died," she laughed, "but then who was. What was. I'm sorry. I'm sorry for a lot of things."

She asked me if they still mentioned her. I said they did, sometimes, and she resigned herself to that.

She asked me if they still knew Bloom. I said they did, and everything exhaled, and she left.

She didn't ask about Ivanov. Who would need to? Ivanov is.
Posted by Daniel Dean at 11:59 PM