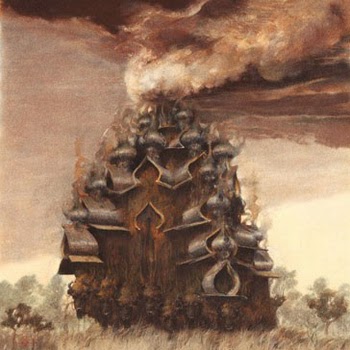 One Sabbatmorn when I was 7 I stood alone on a mountain surrounded by mildewed records and further mildewed people at a flea market. All I wanted, I remember, was a speaker. I thought the speaker was cool. Being 7, I did not own a stereo to use it with. Anyway there was a stall selling Sunday school supplies and I wandered over, figuring my folks would turn up there, and there was a box of donated books and old church library things and lots of smiling sheep and thick volumes of Josephus and halfway through the back was a sealed Fireshade at Nekrozonopolis.

It would have been the best fifty cents I'd ever spent.

Marian Autumn Hartley was one of the infamous One-Hit Wonders who made up the bulk of Adder Entertainment's catalog during their halcyon, apart from a few staid souls like Bloom Rose and Ivanov. Technically. Chances are if you ever held a Rust book in your hands, though, Marian was the typesetter. I'm talking Sight of Slime, Nobody Forgives Castemort, Ogerz, even After Spire Fall. Woman was singly the backbone of the cask-aged scotch attitude at Adder and "Never print anything you can't rewrite" has become something of a standard taken up by her followers in the DIY RPG community, an admonishment not only to put the work before the destination but a plea not to take anything such as the "official rules" as such a thing stronger than a suggestion.

(Actually my personal favorite quote from Hartley came from a con panel, about what she thought went into a successful module: "Alligators, or Emily Bronte.")

I'm archnemesis to the supposed-to-lose fight. I understand the dramatic potential of the inevitable and recovering from defeat and overcoming baaaaaaaAAA. In a story. A video game is not just a story, it's a participatory experience and a test of my abilities and handing someone the Gordian Knot and breaking their sword over a rock isn't being clever or challenging, it's being lazy and easy. I cannot fucking abide them at my table. Get out of here with that. It's hard enough to get everyone around the table for a few hours every couple weeks and I'm going to waste their time, or have my time wasted, just to build up the bad guy's threat for the REAL fight when I'm ALLOWED to beat him NEXT time? Or make that shit a dream?

Fireshade at Nekrozonopolis is the only thing, the single thing, keeping me from saying that can never be a useful device at the table. The thing is that its supposed-to-lose fight isn't. The PCs can avoid the stampede if your players are clever and fast and a little lucky. Hell basic cooperation gets you halfway there. And maybe a third of the module is given over to the side effects and after effects, nested little tables like an Ikea show floor. You can miss the meat of the adventure through sheer dumb luck and not ENTIRELY waste the DM's money. But to escape the stampede and the blood and the burning is to miss one of the great dungeon gauntlets. Are YOU a bad enough dude to fight your way through the spirits of a thousand fallen warriors, the gods of smoke and harvest and flood? Nameless and not of man. Heaven is weird. Only atop the dust and breath, where the shadow temple rests, can you win your freedom.

There's buy-in, see. Someone has to want to play this, to say "Okay give us an experience like this, anything but the kobold-goblin-orc ladder again." I like that it has to be agreed upon like a road trip, and I like playing with anybody who likes and chooses to play this manner of game.

This is my favorite kind of module: the kind that can be dropped into most any campaign with minor tweaks, or, should you desire, can instead be the campaign. Expanding out ideas in this book is super easy, with lots of fun ideas suggesting themselves. Here's one I tried: Skeleton Pamplona.

Hartley semi-retired after this, supervising computer drafters for the company until the summer of 93. Fireshade at Nekrozonopolis has never been reprinted and, unless Krypton reforms, it likely never will be. That's a damn shame, says I, particularly because I'd like to actually buy one one day instead of running off the microfiche copy that turned up in Vancouver back 2002. If you see somebody Kickstart this 1) Back that shit 2) Tell me immediately. I'd like to save 400 bones.
Posted by Daniel Dean at 11:41 PM