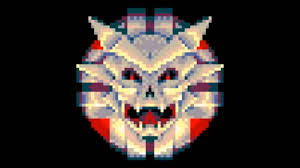 There is a whole planet that hates you, made of flesh and metal. He is hungry. He is coming. A planet with a meany face. You have no other powers. Who'd need 'em?

BEWARE - Sinistrines can cast Cause Fear at will.

RUN COWARD - Any creature fleeing a Sinistrine does so at double their normal movement and is -4AC.

I LIVE - Sinistrines get 2 health bars, or only die when reduced to 0HP twice.

I HUNGER - Sinistrines can eat anything like Matter Eater Lad and put away their body weight per day. It takes just as long as it takes a normal person to eat stuff. Every body they devour in this way gives them 100 bonus XP.

AUUURRRAAAAAGGGHHHH - 3/day a Sinistrine can scream as a zero action and gain a to-hit and damage bonus equal to its target if it is greater than their own for the same round. A natural 20 rolled on this round's attack instantly kills anything with HD equal or less than the party combined. No one treasure/xp-from-gold for this kill because Sinistar ate your quarters.

I AM SINISTAR - On reaching 9th level a Sinistrine is remade in his terrible image. He can float 50'/round in combat, has 360 degree vision, a bite attack equal to their previous armed to-hit and damage bonus, is considered magical for the purpose of overcoming magical resistance, gain resistance to nonmagical weapons themselves, and can survive in a vacuum. His HP doubles and then never again improves, even from magic.
Posted by Daniel Dean at 11:54 PM