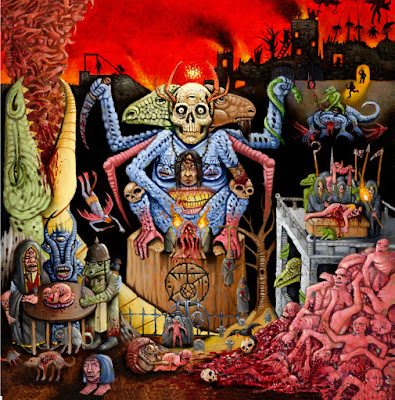 Bone pioneer and lysergic athlete Judas Babbage was fired from Adder Entertainment with extreme prejudice and served 2 years for the assaults which followed. He entered the pen with a half dozen adventures complete and ready to publish, including the inciting incendiary book behind his termination, Go Fuck A Baby. Failed by the mental health industry Babbage felt he had no one to turn to when his medication not only stopped being effective but completely turned on him. Before his death in the early 90s he expressed a lot of regret over how things went down, and specifically for GFAB.

"What I set out to do was make a game no one else would do. I didn't believe [in] such a thing as things you shouldn't do, creatively. I guess I still don't. So when everyone kept insisting what I was doing was terrible, my response was fuck you, get more babies...

"Someone calls themselves an artist, you call yourself an art lover, you don't want them to give you what you ask for. You want something only you can do...I think I was the only one who would do that one, but looking back I think anybody could do it. It's pretty tacky. I mean I don't know that I shouldn't have done it but I wish I hadn't...I was a hurting young man trying to find someone to listen to me, only I just incensed people. I didn't interest them."

Babbage's wife Copernica published several of the titles Judas had completed in order to defray legal expenses and help support herself. GFAB was never published but cam-paks such as Hey Iron Devil and Killing Age Heroes did see the light of day, fully compatible with Æ's contemporary releases. They were not allowed to promote themselves as such but they did still contain some signature language and reference to other Æ titles. All credits apart from Judas and Copernica's names were stripped and this led to a continuing controversy over the provenance of certain artworks. These problems, very real and very shady, should not detract from the fact that Judas Babbage was our dirty grampa and we are all his deformed children. Judas Babbage was the Batman that games needed.

When Æ reconvened in 1999 people were ready to feel good about giving strangers money to play games again. In the spirit of that enthusiasm Babbage was posthumously welcomed back into the fold. Before she died in 2000, Copernica signed a deal granting Babbage's finest work, They're Here Already, to be republished and re-edited for the initial wave of NovÆ reprints. They're Here Already II is an improvement where changes are made but the original material is largely, and shockingly, untouched.

Near the city of Knife Hole there is a great pit, around which there are seven churches. The pit is a Throat straight to hell, a dungeon massive in description if not in size. If there's one complaint which rules all others and in the darkness binds them it's that Babbage's kamikaze antipsychotics were on a bleeding roll and you get descriptions all over the place here. Thoughts completely abandoned and picked up in another room. Inconsistencies like what color the blood is. For the most part this is an issue for the person shepherding the game with those playing likely not to even see much in the way of nits and tears, but that itself begs the question of the necessity for such elaborate assessments. Babbage was never one to trust an artist, it seems, and reading They're Here Already II I can believe that. Box text is often at best a barnacle but Babbage seemed to think that 10,000 words was worth a picture. If there's a strange bit of praise to offer here, however, it's that this is one of the few adventure modules which would work better as an audiobook.

Each of the churches has been given a prophecy, one which will be fulfilled in 7 days. Thwarting any of these requires delving down the Throat. Seven champions are selected, and one or all of the party will represent these champions. You've all got two things you have to do in order to stop your prophecy but those things will be at fixed points in your descent so you can't control how fast you do them. You can't stay in the Throat safely so you keep having to go up and down and back to town.

Problem: every night one of the prophecies comes true. The town you return to is much changed from the one you left, usually, and represents its own dangers. It's entirely possible, after a couple of days of play, to get trapped in town dealing with its complications and never make it down the Throat at all.

The complications themselves usually involve the transposition of an asset, resource, or ally with some kind of non-union EC Comics equivalent, and by the end of the week not only has the town become a Tim Burton wet dream but the throat inverts, becoming a moving column of hell scorching its way across the world.

The actual meat of the cam-pak though is the time you spend in the Throat. The Throat-Threats within are all suitably deadly and the best way to survive anything you meet is running, as they seem to all have been designed after crocs and hippos: deadly, shockingly fast in the short term, but slow lethargic to the point of stillness in the long run. Of particular pleasure was the Answermander, a monster which screams advice on defeating the dangers as it chases you, but will absolutely slice you to ribbons if it catches you. Nothing really hurts it apart from a secret he only reveals when he kills someone. I used to use @nswerm@nder as my handle in the old IRC #AE room on the goatz network. This concludes the sad little peek into my life.

The chief innovation here is the Rules Table. The demonians of the Throat love rules, and love to talk. Any rule stated by a denizen becomes fundamental physical and magical law while in the Throat, but these rules are assigned randomly whenever a demonian interaction occurs. It makes one confident that no two people who played They're Here Already II have ever played nearly the same game, something always said about only the best games.

The revisions are largely on the lines of a proper table of contents and index, proper art credits, some new art, and some thorough proofreading. One large change, however, is that the connecting thread one followed from the bottom of the Throat to the Babbage release Siege of Blood Ants has been removed. In its place is a circle of counter-churches, one each devoted to the prophecies the churches above are trying to prevent. They do not have their own champions, but players can choose to switch their letter over to these new counter-churches. It's an improvement which Æ credits still to Judas and Copernica Babbage, but which has been surreptitiously confirmed to be the work of Killer Ivanova.

While much of Babbage's other catalog saw print in the Sibbilants anthology a few items will likely never be reprinted due to art right disputes the Babbages laid the ground work for. Go Fuck A Baby remains unpublished, of course, but several small companies have made reference to its infamous title, such as the Cyclopean Romanse novel Go Hug a Babylon (insufferably) and the controversial Cobra Party Free RPG Day release G-Fabulous! (interminable for different, 'hilarious' reasons)

Perhaps the best legacy Babbage could have is a gamer support group for people suffering from mental illness, They're Here Already, dedicated to speaking out about mental illness among gamers to destigmatize it and remind people they aren't alone. This organization drew fire from their choice of name but there is no such thing as a perfect ally. No unblemished legacy. And as forefather and object study Babbage means more to our little community than his game books ever did, really.
Posted by Daniel Dean at 1:53 PM