So Druids are a little bit Magic-User, a little bit Cleric, a little bit warrior, a little bit Swamp Thing, a little bit Manimal, a little bit Radagast, a little bit Getafix, and a little bit When Shall We Three Meet Again. This is all in the default D&D druid, a mess of "and this too" from everybody free-associating what a druid/nature worshipper/plant wizard/savage medicineman should look like. They do nothing specific or focused and nothing super well. Moreover while I get the idea that they can be fun from a role-playing lala hippie way when it comes to D&D as a game and the default assumptions od D&D then druids are boring. They're very passive-reactive, less concerned or UNconcerned with material goods or worldly power, very highly structured in terms of ability advancement and in-game advancement who level up through performance reviews, and they're neutral so aren't very invested in keeping the world safe or tearing the establishment down, so long as the trees are still happy.

Right down the line, druids are middle-of-the-road. If you focused on any one, or any two, aspects of a druid, and pushed those to their limits, you've got a whole host of cool new unique guys. I tried putting together a table based on the S&W druid, Rules Cyclopedia druid, a couple homebrew druids I'd seen, the LL Advanced druid, and others, like I did with the monk....give the druid a strong core whole retaining some versatility, but everything just evened out to oatmeal.

I did realize something after doing all that, though. Ask an average person with no D&D or World or Warcraft experience what the druids, the "real" druids (which isn't quite a thing as much as its reputation suggests), did when they partied at Stonehenge (which also not really so much but not important right now), did, and they answer that they danced around naked at the full moon and sacrificed things (especially people especially women especially virgins especially kids and babies and stuff) to make the spring come and get magic powers while bathed in the smoke of ritual fires and smoked weed and...

...and where is this? Why isn't this in my druid? Is it because by the time we got a proper druid in the books the Satanic Panic (live at Metrodome half price for seniors) was in full swing and cooler heads decided to ditch all the Lord Summerisle in favor of PAPA SMURF? 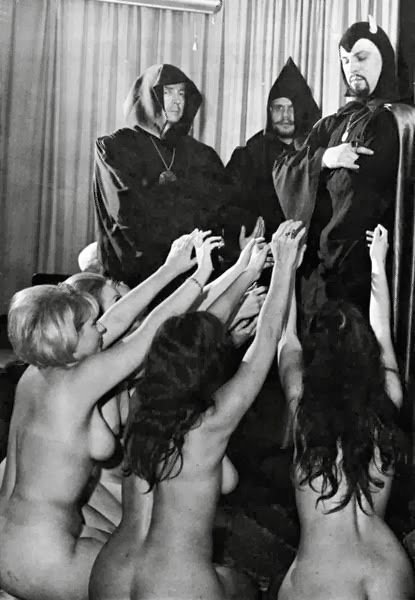 I want creepy old buggers with their mistletoe and berries swinging like Viggo Mortensen in Eastern Promises telling the future with goat guts. I want powerful druid ladies crushing their foes with the powers of winter and night. I want red to make the green. I want sacrifice, the body as vessel, the magic of sensation. I want signs and seers and the doom whispers of magpies and stuff. I want that FEEL. Don't give me versions of other spells and dress them up in plants and animals. Give me whatever spells I can bargain and make me work for that power and dress them up in spikes and chains and chrome and blood and BDSM and smoke and fire and skulls more skulls skulls everywhere and dicks and tits and PANTERA.

That's a druid I want at the table. If your druid is just a....VICAR who can talk to his rose garden then fuck off. Sure I could have put this effort to work to make a good Swamp Thing or potion master or shapeshifter druid and maybe someday I will, but others have done a lot of great work in that area already. Right now, though, I want to take all of the pagan histories "discovered" right before the turn of the 20th century that gave rise to modern movements of paganism and Satanism and so forth and put all of that on the table so if someone rolls a druid on a random encounter chart the reaction isn't "Oh okay." It's "Oh shit!" 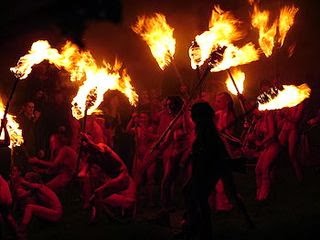 HD: d6 or as Cleric
Saves: as Cleric
Attacks: as Cleric
Advances: as Cleric
Prime Requisite: Wisdom - Druids with a Wisdom of 16+ level as Thieves
Requirements: Constitution 9 and Charisma 9
Yes Druids can know of a spell, that a spell works or how it works, but they don't have a direct line to a god or  the academic training to do it on their own. So in starlight rituals as they dance and couple and smear themselves with natural fluids (your own interpretation there) and drug themselves with plants and toxins to higher states of awareness, they invite nature spirits and demons into their body. These spirits power their spells, but they demand a high price.

A Druid may cast any spell he knows by either killing a willing or helpless sacrifice (for which they receive no XP) or by harming themselves, paying the blood price with their own flesh. A Druid may cast any spell they know and are able to cast (as a MU in your game) by reducing their Hit Points by half, rounded down. The spirit leaves their bodies and casts the spell with itself on behalf of its Druid supplicant. In this way the Druid lives dangerously and will often find herself inches from death, but can cast spells more often.

Druids are no strangers to the power of the blood, of course. They can heal themselves by drinking the blood of a willing ally, gaining an equivalent HP to whatever the ally loses. They can also lend their own blood in this way to heal allies.

Druids never have Retainers, they have Disciples. Or maybe Groupies. People who can help enhance their Druid powers through self-sacrifice of the flesh (again your interpretation). Druids must constantly find new Disciples, but never take a reaction penalty for Disciples dying in their charge, since they attract a fringe element unconcerned with such things.

At 9th level, Druids become arch-druids, and elevate up to 13 Disciples to Druids. From there they sit atop a Druid pyramid scheme, learning spells and gaining powers from these lesser Druids as those Druids gain power from their own Disciples. No supernatural creature may enter the Sanctum set up by the Druid unless the Druid wills it or the creature has more HD than the Druid.

Druids may advance to 13th level. At 13th level, a Druid is claimed by the earth, though she can be summoned or recalled to a place (or a summoning circle, or near to an object precious to them in life) by their Druid followers or those precious to them before they were claimed.

A Druid will advance from gaining wealth but it usually spends this coin on land or property in key areas to perform their rituals, burial costs, and what few supplies for its rituals which the Druid cannot make herself.

----
All ideas here owe as much to obvious sources and the Labyrinth Lord Advanced and Swords and Wizardry druids as they do to gloomtrain's Druid and Metal vs Skin's Druid from the DIY community, two classes I always wanted to figure out how to work for my table that (I realize re-reading this) affected my decisions a lot more than I realized. If you want to use these guys with the spellcasting for Wonder and Wickedness or Vaginas Are Magic! then I'd allow them to choose whether to cast a spell using the blood price or a safe slot/spellcasting roll.
Posted by Daniel Dean at 10:39 PM