Life, Death, and the Middle for CaBH + The West Wind Circuit 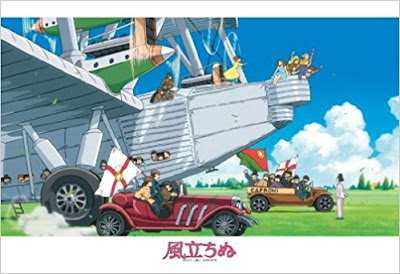 Most of this game will concern whether or not your vehicles are active and in the running but mortal concerns are still a factor. Characters slammed around in crashes or specifically targeted by other racers or creatures, folks suffering from atmospheric hazards, whatever: all these things add Wound Points. You begin suffering impairment (negative modifier of 1-2 pts) at 25 WP, but 35 WP is where things get really interesting for most players. That's when you can elect to let yourself be knocked out or elect to keep going the distance. This requires an Up check to see if you, well, stay up. It's a very easy roll against each character's Toughness. There's other stuff to consider, like Marks of Death, but here is the takeaway:

Your Pilots will not be immortal. They will be damn hard to kill without recklessness or concerted effort being involved.

Your Wound Points give you a big safety net to just do some really whack stuff. You never just hit a guy or drive really well in Feng Shui. You execute a move called Cleaving Fjord Wasp that happens to do punch damage, or take your car around the corner so fast the road cracks behind you. You get creative with your descriptions and you get buck wild with the stunts you want to attempt. Why try to just close some distance when you can do so by blowing out the base of a water tower and driving up it as a ramp, then surfing on the wave when it crashes and the water goes everywhere? That's...not going to lie, a couple rolls, maybe a -2 to a roll, but otherwise totally on the table.

That doesn't just go for your racing or combats. That goes for your role-playing, too.

The reason everyone is controlling multiple characters isn't because everyone loves keeping track of extra bullshit. It's so that no matter what scene we get lost in everyone has an opportunity to help play things out. This is something that can be hard to get people used to in demos of Fiasco (which you can tell I cribbed from) but eventually they get the gist and can fill in some gaps where needed. Your Magic Cop crashes and is our of the race? Play part of the support team for this Sifu over here, help them come out on top, keep playing!

It's also so you don't have to worry about whether or not your racers die. Your Sword Master can dramatically lose a duel in order that you, the Player, get to have a super awesome moment and wrest control of the plot for a minute...and next session your defender from someone else's team is so moved by their sacrifice that they take up his mantle and become a new Masked Vigilante to play.

You don't always have to show up with the same pilot and team, for that matter. Qualification means something in the world but in terms of our playing it just means WHO SHOWS UP - not just who is able to make the session but who the players want to bring.

Playing your Driver character but have an idea for a cyborg character with a big blocky Huitzil-from-Darkstalkers look instead, someone who doesn't know anything but racing but loves it so much? Ok, your Driver didn't qualify this race. Either you make up a good reason or I will. Maybe this will be a fun hook for future sessions, maybe not, but for right now you're Huitzil.

This can also help if you blow all your Resource Die wad and end up still having a busted vehicle, or if your character gets grievously wounded or maimed - you let them convalesce while you bring in someone else.

Speaking of convalescence, reduction of Chase Points during a Pit Stop requires the Fix It skill or Resource Dice. Reduction of Wound Points for a character requires Medicine skill or Resource Dice or some kind of magic/tech/mutation/creature power/etc that allows healing. Remember, normal juncture penalties are assigned geographically instead of by timestream for Chase a Bright Horizon. That applies to healing, too; if your Type can only be healed by Ancient Medicine normally then they can only be healed by someone who honed their skills somewhere DEEPLY strange and magical or unreal.

The West Wind Circuit brings a close to the Four Winds and determines whether the Grandissimo Prix will be held. It is the shortest race, with only four events: a driving race, an air race, and an aqua race, followed by a no-holds-barred last-person-standing demolition derby.

The West Wind Circuit was a later addition to Dawnstar Racing, a way to help settle close points rankings so there was no dispute as to who the winner of a season was. It's also a final test for any team which has managed to run away with the other three circuits. This was when Mammon Summer got tired of dealing with too many half baked challengers. Now anybody who has still proved themselves with distinction after the West Wind Circuit can expect an invitation should the Grandissimo Prix be held.

It's easy to be titillated by the demolition derby, sure, but these other races are hardly the same fare you'll see in a normal circuit. Each has some extra flair, some strange new rule, dangerous hazards, and sometimes direct opposition in the form of Dawnstar Team, a group of racing gladiators who hold no official racing position but operate as a kind of mobile, 'most-dangerous' hazard. Each of Dawnstar Team were once a pilot with a team of their own before being soundly defeated by Mammon Summer in the Grandissimo Prix.

These races are rare and deadly. Winning any of these, much less the circuit, is a storied accomplishment respected just as much as winning the Grandissimo Prix!

That's probably because nobody has survived winning the Grandissimo Prix. What a specific sentence...
Posted by Daniel Dean at 10:40 PM