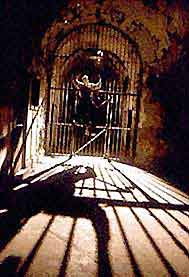 Posted by Daniel Dean at 6:31 PM No comments: 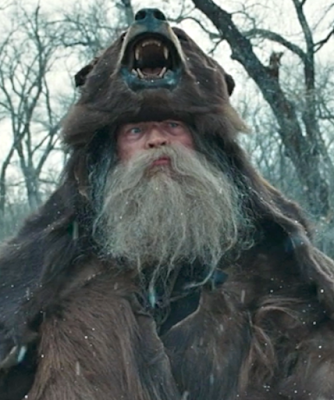 Posted by Daniel Dean at 9:21 AM No comments:

A Room A Day 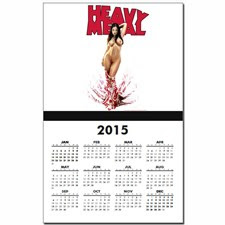 I'm too fucking exhausted to do anything real but I'll be damned if I let that stop me so for a while I'm going to come back to this post every day and add another room. Use some, please.

1. The Wailing Showers. The smell of opium has been coming from in here. It was once an ornately mosaic room showing a beautiful beachside scene but most of that is covered in mildew, or else crumbling. At the far corner from the entrance, a series of great brass faces pour an endless stream of water. It collects in a small pool below, and there are lots of other pools here and there because the ceiling is deterioration, because some pipes busted, and now there are spots where it's like rainfall. This has affected the water pressure: the faces do not spew like your shower head in 2015 might, but like the hose in your yard might.

There are three creatures here, and they are all basically The Faceless Hunter From Saturn. They have Ogre strength and painful rays that turn you into a creature like them. When they are in the water, lazing in the pool smoking opium, standing in a puddle, in a drizzle from above, you can see them. When normal PCs are in this water, they are invisible. Drinking this water turns you into a human.

The stuff they are smoking is awesome. There's enough to get really high here 20 times over. Every time you do, it counts as your food and water needs for the day. However, you also gain a figment of your imagination. For a warrior this may be a weapon that doesn't exist, or enemies only you can see. For a spellcaster, it may be a nonexistant spell. Whenever you try to attack someone or cast a spell, you have to save against this effect or act like a fucking idiot.

The creatures want sex and gold, but will settle for more magic drugs. They fucking hate each other but are all sitting naked in 10 inches of water together.

2. Pit of the Nega-Trees. It's a fall hazard, sure, but it's an obvious one, and falling into it only does half or less normal damage for that deep a fall. This is because this pit is filled with billowy drifts of fine ash, and it kind of looks like those Rose-Art sand art kits. This pit is an altar where machine-minded progress cults sacrifice pieces of the forest to Nur-Za, the Forgeting Tsar.  It's like a curse machine against a particular forest you want to harvest: you throw in a whole tree from a sacred grove and after a while its magic is forgotten and even its physical form is unwound. This weakens the power and protections afforded the larger forest.

Touching a torch to one of these colored ash piles causes the tree to un-burn. Try not to get yourself killed in the blaze, as ash swirls up from where it has mixed over the centuries, and slowly reconstitutes a kind of tree that everyone has forgotten ever existed. Black pomegranates the size of basketballs. Flowers which spin branches like a spider. There is one tree here that is a trap against tampering with Nur-Za.

Unburning it creates a tree whose fruit is hanging murderers, attached to the tree by vines coming out of and wrapping around their necks. Eternally dying and dancing. Picking them, or having them ripen and fall, brings them fully to life, 2d30 of the worst murderers, killers so heinous that record of their deeds was struck ages ago. They live for a week and a half, slowly overripening and rotting.

3. Clock Prison. There are no torches or even sconces lining the hallway leading to this dead end, and an old wooden door that seems like it'll fall apart if you lean on it heavy enough. Never mind forcing it. The door is the first victim of this room.

Within, piled in crates, lining shelves, heaped on each other, are discs, some made of wood, some of smooth marble, some of gold. They are sundials, and they control time which must not be spent. The age of a mountain. The time of a god. The epoch of man. How long love lasts. In the flicker of torchlight, they all set themselves a-spinning. Any of these masterworks would be worth a fortune without these properties, and actually taking any of these out into the sun would be pretty disastrous but in a way you may never know, or not know for some time at least.

There is a security feature in this room: one completely assembled sundial on an immovable stone pillar. It speeds time at the prosaic level: a moment in this room passes as a minute, a minute an hour, an hour a day, a day a week, a week a year, a year a decade, a decade a century....You are unaware of this disparity until the first time you leave the room, but the passage of time does affect you. Your friends may just start dropping dead around you and when you flee the room you go, oh, I'm 90, that's what got those guys. Being 90.

4. Pimp Cradle. This is where the sorcerer spends most of his time. It looks decorated in early Otus with a splash of millennial decay. This is false. There is a secret lever in this room which can only be pulled if you feed it a truth you concealed that day. Pulling this lever causes the altar to flip over into a plush canopy bed, the gargoyle slides back to reveal a small hookah lounge...basically it transforms into a comfortable sex pad. The sorcerer pulls both switcheroos on two very different groups of "guests."

EDIT- So this obviously didn't happen. I'll find somewhere else to put these rooms before this page goes bye bye.
Posted by Daniel Dean at 8:50 PM 1 comment: