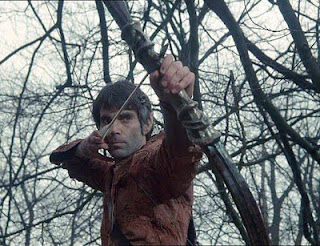 That is boring. As editions pile up (and an important factor: as D&D novels pile up) elfs get all sorts of other cool shit. Even before Orlando Bloom comes along elfs are all stunning and cool and Above.

I don't need class as a class. "I rolled up metropolitan aristocracy!" Hell with that. And none of this really underlines the cool shit we associate with elfs.

Elfs are one with the forest, one with nature. Their step is a cloud, unheard and unseen. They are so perceptive as to be difficult to lay a hand on. They are so graceful as to save themselves from certain death. They're swift. They're really great at shooting you from a distance. That's an elf all right.

Except in BX or LotFP none of that is an elf. That's a FUCKING Hobbit.

I find it exceedingly weird that hobbits are still in the game. I do not MIND it at all, especially since all halflings are cowboys (which is another article I guess). It's just strange that they're in there in the first place from exactly one (1) point of reference where dwarfs and elfs are recommended by a plethora of myth and traditions. Gnomes, even, or a T&T style leprechaun, sure, but hobbits is weird.

I can also say that in all my years of running and playing I have never run for nor played with another character who was playing a halfling. I know one guy who played an elf and one gal who played a drow. I think a lot of this owes to the idea that people like their character to be thought of as a badass and nobody, after 6 big movies not counting the other adaptations, thinks hobbits are badass. Another factor is that elfs always take forever to level. It's the one thing they aren't best at, really.

If you want to play a halfling that's fine, play a dwarf and call it a halfling and give it different languages and requirements and shit. Hell we can make a pretty good damn halfling this way, yknow? Another solution is to just...not. If a player asks about hobbits then you can spin them one on the fly but let the work you put into it correspond to how often it comes up.

Don't like the halfling weapon restriction? Ignore it. Or just make longbows a specific exception: longbow and all one handed weapons. Or make it a reward: a lot of people don't even use BX/s bonus XP rules these days so if you have Dexterity 13 you don't get extra XP you get longbow proficiency. Or keep it and recast your mind-elf: elfs are 5', reedy, and at 5th level they all start growing horns. Or just accept that your damage output with a shortbow for BX or LotFP are the same as a longbow and you're really just trading off some extra distance at long range, then just use a shortbow. Leave longbow use to be another special thing for the Fighter to have, greedy guts.

The best thing about this change is it's so EASY. I could probably whip up a quick-n-dirty DnD PHB in like 1000 words. Most of us could. And it could have all these fun spins on these old types of guy. It's just....who needs that? If I want to play old school dnd right now I have SEVENTEEN or so rulesets on my computer including the originals. Fuc. k. This way you just go, "we do this now," and then you do this now.

From now on all elfs use the character builds for halflings instead.

and some of them are FUCKING BRUNETTE.
Posted by Daniel Dean at 5:48 PM