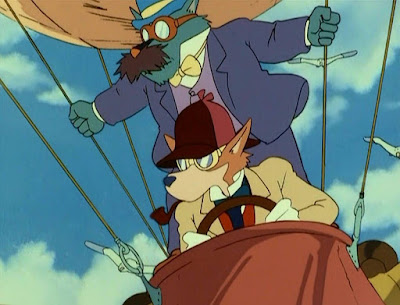 A lot of the heavy lifting of delineating a character concept and melodramatic hook in conventional Feng Shui is done by the very very Fiasco like (read: I ripped them off from Fiasco) relationship tables and the whole...premise of the campaign, really. You aren't disparate Dragons from all walks of life, different times and dimensions, coming together to fight a geographical war using time. Not necessarily. More likely you're excitable nobodies in a grander game or broad celebrity types angling for...whatever keeps you going, I guess.

The seed germ of this game was Studio Ghibli Wacky Races and I never want to get so far away from that as to be unable to see it without a telescope. That's not the only point of reference here. 80s cartoons - G.I. Joe specifically, and the legions of G.I. Joe knock offs like Ma-Ma-Ma-Mask. 80s professional wrestling. Card game anime. Lesser Square games. Through the Lupin III door comes Cowboy Bebop and the rest of the Watanabe canon. HAMTARO. Inevitably David Bowie. Schwarzeneggar movies but not the ones like Commando and Predator you'd expect. Scooby Doo and the Reluctant Werewolf. Mario Kart. What You'd Think Jojo Was If You Only Knew It Through Osmosis. My First BREAK!! Character. Sammo Hung movies. Not Speed Racer the cartoon but Speed Racer the movie.

Astro City #1. Astro City #1/2. Gumball Rally, or to a lesser extent Cannonball Run and Rat Race. The Good, The Bad, and the Weird. It's A Mad Mad Mad Mad World. The Catanooga Cats. Goldfinger, Maison Ikkoku, KIYOHIKO AZUMA, Steven Universe, the parts of Fury Road that aren't in cars.

Disney Afternoon. High School AU Fan Fiction. 2005 series Doctor Who Power of Love Endings. Raiders. American Graffiti. Only the music from Katamari Damacy. Crazy Taxi. Master Roshi. The characters before Atreyu shows up. Global Frequency. The really sappy later seasons of MASH and Scrubs. The end of Schindler's List. The scene where Gen Wilder locks himself in with Peter Boyle. "So shines a good deed in a weary world." "I want everything I've ever seen in the movies!" Fuck it just Gene Wilder.

Buster Keaton while we're at it. Michelle Rodriguez. The part in Sailor Moon where she really wants to be Sailor V and ONLY those parts. Kamen Rider and Ultraman and Godzilla and Jack Kirby and Neil Gaiman and G. Willow Wilson but mostly for Mystic and Air. NextWave specifically. Marvel vs. Capcom 2. Power Stone. Sonic Adventure is shitty but the feeling of that game when you were twelve Actually fuck it DREAMCAST.

The bedrock, proto Ghibli: the Real Ghostbusters, Akira, Sherlock Hound? Sherlock Fucking Hound. Archie's Ninja Turtles comics. Legend of Five Rings by way of Last Airbender. Death Race 2000. The alternate reality represented in Monster Truck VHS tapes from the 90s where the guy who owned Bigfoot stopped drug dealers by running over their mobile homes. Monster Truck tv commercials. Jackass the Movie 2. E Honda. Yokai Monsters Attack. The weird Flintstones cartoons where their neighbors were the Munsters and they hung out with the Shmoo and then The Thing like Marvel Comics' The Thing was there too what

Pixar but not the cars ones. Disney Princesses As... Tumblr galleries. Micro Machines commercials. Explicitly and exclusively seven Transformers. The Music Meister Brave and the Bold. Unironic power chords.

Only the sincerest parts of Freakazoid!

Establishing shots of flowers and rivers.

The East Wind Circuit is chiefly focused on sky races. The dangers here are obvious: any vehicle-to-vehicle contact ends in disaster. Crashes or "stoppages" from Chase Points can often be fatal. It can be harder to catch up from an early deficit. There are a greater number of no-fly-zones in nations than there are conventionally closed borders, as in Chevalle. Atmospheric phenomena.

Air races also require contending with travel ships and war ships more frequently in any other race mode. These are massive hulks with strange shapes and sometimes stranger missions. Magical forces, be it broomsticks or dragons, are more common in this mode than any other circuit.

The circuit culminates with a fireworks-spackled, explosion-dodging race around the world. A race against midnight to champion the first victor of the New Year.

While this circuit courts the least interference from the Road Dawgs or Knightrous Oxhide it does have some, shall we way, unique aggressors. These fields are usually pretty open and have a lot of racers who qualify. This is perhaps the most nationalistic/jingoistic of circuits, like the Olympics meets Top Gun. They are also, often, the shortest races, usually with only one major Pit Stop per race.

The skies go on forever, until they don't. Keep your wits about you, maintain dead reckoning, stay out of twilight, and think of something cool to put on your parachute.
Posted by Daniel Dean at 11:16 PM