Feng Shui Rules Not in CaBH + the Grandissimo Prix 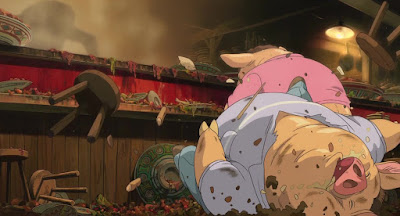 I've already mentioned that I won't be assessing Juncture penalties normally associated with Feng Shui's base setting. I'm going to spread those out geographically. There are some other things I'm not going to be doing as much.

Advancement is not going to be based on controlling chi sites; instead, you advance and the rest of your team mildly improves whenever you win a race. Advancement is not as rigid or as necessary in Feng Shui as it is in other games anyway; the difficulty curve is a lot flatter.

I'm not doing "called shot" stunts and multi-attack; that is, no "I want to stab two extra guys" and get a penalty to your roll. This makes more sense in physical combat and isn't all that interesting to adjudicate anyway. Since a ton of Driving checks are involved here it's also harder to call a shot - with everyone jockeying for position, not just impact, a lot more moving parts. Instead, if you get a great result (boxcars-then-success or you just really really nail your check by like 5+ over what was needed) then we can tack on an extra benefit as well. Throwing mud, catching another team off guard, going up on two wheels to earn some Favor points... whatever.

If you deliberately crash a vehicle you don't get to decide whether that crash is potentially fatal or not. I do, or I make a Fortune check to decide.

As mentioned elsewhere your characters won't start out with a lot of the vehicles and firearms they normally would get as a matter of course, with exceptions for Types who only exist to use a weapon like Sword Master, Killer, etc.

Weapon Ranges are going to use the Grover Metric of "near and far" used to determine racing distance. No modifier for near attacks, +4 Difficulty for far attacks.

Weapon Concealment will not be a factor.

No Melodrama Checks. I trust everyone to be able to remember to be true to their characters. Instead of enforcing this with a check I'm going to use positive reinforcement in the form of Favor and Teamwork. Most of the weight of picking your concept and hook are taken care of by the setting and character/team generation tables. From there, if you are true to the spirit of your guy and the game even when it would benefit you not to be, you'll earn some Favor or Teamwork. This is the only way you can earn Favor during Pit Stops and Teamwork during racing legs.

The CH-CHAK rule: one of the cutest rules in the base game is adding 1 shot to your Guns action to cock a shotgun, adding +1 to your damage. The cool thing about this rule is that it helps get you to thinking of actions in terms of shots. Jackie kicking a guy is one action but can be a slow-mo shot of Jackie's kick connecting, a shot showing the enemy going flying, and a shot of Jackie resuming his Good Kick stance. Thinking about things in terms of cuts explains why some actions take the time they do. That said, we won't have as many shotguns in this game so....At any time you can add 1 to a shot in order to gain +1 to your inflicted Chase Points IF you can describe the action with some extra bit of visual flair. You should be doing this a bit anyway, and this change should help to reinforce that a bit. Remember though: shot cost matters, and you can easily burn through a sequence landing only two good moves and spending the rest of your time dodging.

Lastly, excepting for Dragons, Transformed Animal reversions do not mean you lose control of your character. This is because I think it is funny and genre appropriate if you turn into a pig mid-race and continue driving. You lose all your cool Shticks and your Skills all set to 7 and you follow Mook rules but otherwise you are good until the next Pit Stop. If you are not restored quickly, however, you do remain stuck as an animal and your interest and effectiveness in racing wanes. Your Team can keep you around as a good luck mascot from now on but until you are restored you are basically furniture.

In terms of the world, the Grandissimo Prix was first staged after the first racer to win all Four Winds declared herself the greatest racer of all time. Mammon Summer took exception to this and staged the Grandissimo Prix, a road race comprised of herself, this new challenger, and eight teams picked from the final Victory Point standings of each circuit. The Dawnstar Racing Test Track is the stage, a flat straight drag across stainless steel laid into alkali flats.

Tragedy and disaster have occurred during each of the previous eleven Grandissimo Prix events. Death, natural disaster, and stranger things: during the last Grandissimo Prix five years ago a sudden eclipse shrouded the track and only the track. When the race was over only Mammon Summer stood standing, and she only barely; all other racers were either maimed, comatose, or worse. None have been able to speak about that day and Mammon sure isn't sharing.

Mammon Summer is not an evil woman, it seems. There have long been rumblings that Dawnstar Racing hides a dark side, as well as valuable secrets. If these are true then she must be the true keeper of these keys. One could scarcely blame her for doing whatever it takes to see Dawnstar Racing flourish. Mammon stakes both her reputation and the future of her company on the Grandissimo Prix. They're one and the same, and the true prize to be sought.

Mammon Summer was not always Dawnstar Racing's president and CEO. She was a racer. A storied one, sure, but one who gambled her way into a position of absolute power. Why she has allowed tradition to stand during her reign is anybody's guess - perhaps she secretly hopes someone will defeat her one day - but completing the Grandissimo Prix opens a golden door for you and everyone you care about. It might open more.
Posted by Daniel Dean at 3:29 PM