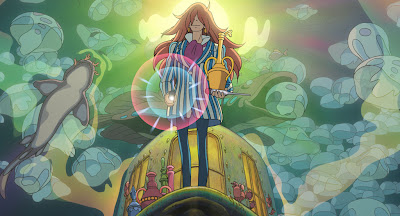 Using Magic in Feng Shui involves having a Sorcery value (or Creature value) for your primary or secondary attack. It is also rolled like a traditional Action Value in order to use it to make the equivalent to Arcana checks, or to turn up a magical contact, or similar things. Where most characters have a place on their sheet reading Fortune or Chi or whatever yours says Magic, and is used as both a pool of points to spend to activate magic effects and points to be spent on more standard Fortune dice.  If a Fortune check is prompted against you and you succeed you can easily get away with describing yourself succeeding with some supernatural flair, even if you don't have a relevant schtick.

Schticks are great but the hardest thing to break people of when they're new to the game is thinking with their schticks. Tony Jaa probably doesn't have a specific schtick to do a somersault axe kick off the back of an elephant into the back of some dude's head in Ong Bak II but he sure fucking did it. There's nothing stopping a zen Buddhist monk from also being a high flying stunt driver and there's nothing keeping IMPEEERATOHH FURIOSHAAAAA from trying to use a magic amulet if she finds one. Your starting AV might be less than great (defaults to 7) or the difficulty might change but you still have a shot. True for action movies and for the kinds of children's fiction informing this game. The lifeblood of most Feng Shui games' sorcery is a plain old magic missile style Chi Blast, just a good old zap. That's fine for a lot of stand-up fights and will even be quite helpful during racing legs but the other shticks available to magic peoples are going to be more effective here, especially the ones that let you do well during Pit Stops (and therefore build Teamwork points).

Only a handful of Types have magic baked in or have the opportunity to learn it as they advance. In theory anyone could seek our some witch and learn a few tricks with enough practice but we will not really afford time for such.

Most of these Types will come from kingdoms rife with magic, where their power is stronger, but not always. Maybe your racer comes from a more mundane nation where your special powers make you a true standout. Maybe you're from somewhere magic isn't even supposed to be possible, like one of the steaming smoking machine kingdoms. Maybe you're just a ghost, ghosts come from anywhere. That's fine, just be aware that your powers will be affected by the region you're in.

It also shouldn't need pointing out that other Types can come from the more magical kingdoms. Camelot had Big Bruisers too. Sigil still has street sweepers. If you want to show all those fancy wizards that some punk kid can become more famous than any of them then by all means, go at it.

Once you run out of Magic points you're out of juice unless you find some kind of potion or geomantic nucleus to let you top off. Normally they all come back at the top of the next session but there's lots of reasons that might not happen.

Serapter is ruled over by the Marquis DuPont, a man at once like an old tree and the shadow of that tree. He has borders within his borders, the Circles of Hell, concentric rings featuring differing degrees of penetration by supernatural planes of existence. There is the Demon Ring, the Spirit Ring, the Nightmare Ring, the Midnight Ring, the Goblin Ring, the Bone Ring, and the Crimson Ring where stands All's Hallow Hall, a castle as big as a city and residence to the Marquis' enormous and ever-growing family. The Marquis is definitely NOT a vampire, why would you even ask?

Wigviauln is a place where the practice of magic is so common it is used for daily tasks. Small elemental creatures and magically animated constructs are found here but that's about it. Wigviauln citizens do every job under the sun but with a bit of magical flair. Then there are the spellcasters. Druids, maguses, priestesses, warlocks, witches, sorceresses, mediums, wizards, any kind of magical practicioner, specialization, or tool you can name: all of these are found here, in the world's top center for magical research and understanding. The government of Wigviauln is somewhat corrupt, based on an enormous academic committee honoring truly arcane seniority and tenure traditions. The young Librarian, Sheila Lala, sits at the top.

Goroshi is rich in mystical presence if you know where to look, or how. Attend the right shrine, bathe in the right spring, knock on the right log, and you might summon a spirit - perhaps the spirit of that log, or of the forest, or the spirit of trees. You are always watched but rarely interfered with. Obviously-supernatural things do happen but they are accepted as a common thing to plan around, like a thunderstorm or like harvest time. There is a very respectful, congenial relationship between the people here and the many spirits of nature, machine, and emotion. When a spirit gets out of line, though, humans are expected to handle it themselves. Almost every top exorcist from SEDAN comes from Goroshi, and the Goroshi government (headed by President Iku, though he prefers "Mr. President") even has its own department to head up human and spirit world affairs. It's anyone's guess how many people on that department are spirits in disguise.

On the tiny islands of Pilioimoi the most dangerous thing you can meet is a stranger. That's not to say that the folk there are fearful. Far from it: the beliefs of their nations hold that kindness, openness, acceptance, forgiveness, and an overall spirit of giving to strangers is the wisest and best option. For another culture this readiness to greet your conquerors would have led to some turmoil over the centuries but, here, it means that life has progressed largely untouched by the dangers of the modern world, barring a few technological conveniences. That is because the dangerous strangers in these islands have long been the peoples' protectors, swirling these misty archipelagos with boons and wards beyond reproach by other powers. The islands of Pilioimoi are where the gods go to both vacation... and to hospice. Perhaps it's inevitable that some of the less alien among them would fancy a good race now and again...
Posted by Daniel Dean at 8:18 PM