Bards are a weird catch-all class and as time has gone by they've picked up more and more abilities that don't quite fit anywhere or aren't enough to fill up a whole class. They're minstrels, they're magicians, they're illusionists, they're thieves, they're fighters, they're Dirk Benedict from the A-Team, they're assassins and great at poison for some reason.....I wanted to make a bard that was a bard like Shakespeare was a bard, tying into some of my feelings about Magic-Users. I wanted an option for a class whose knowledge of magic is incidental to their real interests. I also wanted a class of adventurers from the opening of Monty Python's The Meaning of Life. I don't know that they quite work as a class to themselves and I think for the most part I'm just going to rely on Alternative Spellcasting for the same effect. 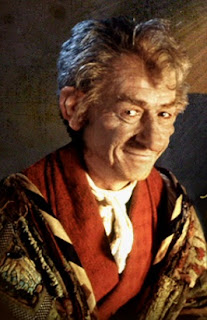 Scriveners are sometimes called Scribes or Bards (in the master poet and storyteller sense not the Sister Golden Hair sense) and have the ability to Enchant a number of times per day equal to their level. Scriveners possess no unique magical aptitude and acquire their abilities through repetition over a long time. Eventually, they know certain stories, jokes, curses, legends, and riddles inside and out.

A Scrivener can Enchant a group equal in number to the Scrivener's total Hit Dice (or the Scrivener's Hit Die's value of non-HD peoples or creatures). A Scrivener must share a language with his audience at first level, but may cast Comprehend Languages as a free action after 3rd level to facilitate. A Scrivener may Enchant his audience for a number of minutes equal to the highest value of his combined Hit Dice. In this manner a level 12 Scrivener could Enchant 12HD worth of creatures 12 times per day for 48 minutes each, assuming he always shared a language with his audience.

Creatures who are thus Enchanted get a Save vs. Wands to resist. Otherwise, the creatures are captivated by the Scrivener, unable to leave or attack or do anything other than laugh, cry, or ask questions. This effect ends if the targets are attacked. After the Enchantment ends, affected targets must make a Morale save or else either leave the Scrivener in peace or treat him as 1 level better on a reaction table.

Scriveners are always old.
Posted by Daniel Dean at 11:56 PM