I'm a huge fan of the first two Paper Mario games, and to a lesser extend the third one. I've long kicked around the idea of doing a table-top game with it since it's ready made for the idea, at least if people stick to playing the kinds of characters who are often Mario's sidekicks in these games. The Shyguy works really well as a kind of Fighter-Also but I ultimately think I'd go with Savage Worlds or something for a full-on game of Mario RPG.
------------------------------------- 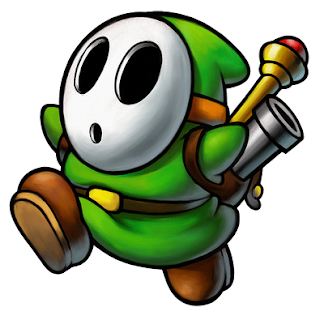 HD: d6
Save: as Halfling
Attack: as Cleric
Advance: as Cleric
Requirements: 8+ in all Ability Scores.

If a Shyguy's mask is lost, they will cover their face and fall prostrate before their true face may be seen. If this mask is not returned immediately, they will vanish in a puff of purple or green smoke and are considered dead. A Shyguy vanishing in this manner always leaves behind 1 gold per level, regardless of coins and equipment carried.
Posted by Daniel Dean at 2:55 PM