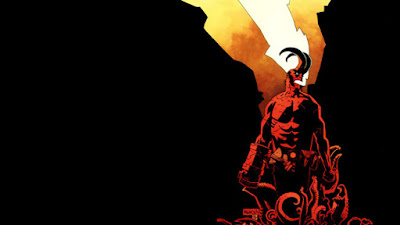 ...and ones I'm going to be asking for in my G+ games and my Whiskeyworld game at the store.

Something I usually dislike in games that split race and class are races which basically exist to be race-as-class in addition to their class. These are laden with innate spell effects or racial features that make them either uniquely suited to a particular class (like how Goliaths are a race of Conans so they suit the Conan class well, to become Double-Conan) or better than a given class (like how 5e playable minotaurs put a level 1 monk to shame in the area of unarmed attacks and moving-while-attacking). It's like a free multiclass or class level instead of being at least a new way to do something in the world, or, failing that, at least a new CHOICE.

Tieflings and Aasimar being ethnic groups owing to tainting from extraplanar sources ages ago also bug me for other reasons, but the only characters I've ever seen from these camps have actually been pretty cool, played by some pretty creative, mellow people. And I want that in my games, so if these races be the price I pay for something like that, so be it. But I'm going to make it palatable to me, and especially where Tieflings are concerned throw in some fucking chaos in the mix.

Some of this is not so much stolen from +Zak Smith as it is me trying to duplicate something of his I read years ago without actually going back to find it, hopefully resulting in something of a different product. I also nuked Darkvision because I've been reading +Arnold K. some more lately.

Ability Score Increase: Roll 1d6 where each value 1-6 corresponds to the way your Ability Scores are laid out on your Character Sheet. Reroll sixes. +1 to the Ability Score corresponding to your d6 roll. +2 to Charisma.
Age: same.
Alignment: I don't care.
Size: CHOOSE: Small or Medium.
Speed: 35' for Small, 30' for Medium.
Hellish Resistance: You have Advantage on saves against fire damage.
Ancestral Chaos: Roll 1d6. 1- you also have resistance against fire damage; 2- you also have Advantage on saves against cold damage; 3- you are trained in Insight and Persuasion; 4- you do not need to eat or drink so long as you routinely warm yourself by the fire or smoke; 5- you do not incur two failures when rolling a 1 on a Death Save; 6- you gain a long jump and high jump from a standing start equal to your Strength score in feet.
Freakish Appearance: Consult the Freakish Appearance table in order to determine what you look like.
To Every Task Set They An Tool: CHOOSE ONE: you do not need to breathe or sleep; you gain a +1 cumulative bonus, up to +5, on Stealth checks made to hide for every round you stay shrouded in complete darkness; you learn the cantrip speak with normal flame; you may roll again on the options given for Ancestral Chaos and keep both results.
Languages: You can speak common and you may read, write, and understand Infernal. Speaking Infernal in polite society is an unthinkable taboo saved for curses and castigation.

Choose a normal torch, candle, hearthfire, campfire, lantern, or other mundane light source from non-magical fire. Until you dispel this effect, or until you look away from the flame, the flame tells you in its dance, a language only you understand (even if others around you know this cantrip, they must also cast it for this effect to work), how many other living creatures can see the light of the flame. For the purpose of something like this mattering I guess it would be a Divination School spell.

...and if anybody asked me to make a Feat so their nails, horns, claws, wings, teeth, etc could be more useful, I'd work something out for them as that came up.
Posted by Daniel Dean at 10:56 PM