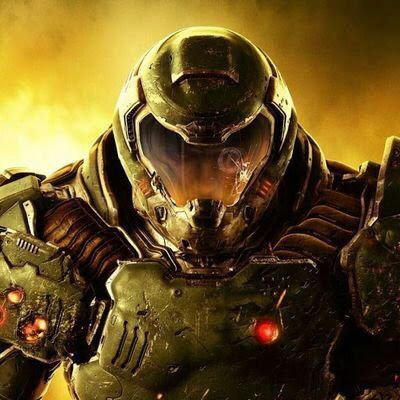 So am I right that this is just the space marine from Doom? Because that's what Google thinks. That's just a Fighter or maybe a Paladin with a different equipment list though, I think. It's hard to extrapolate when we get less about this cat than we got about Master Chief. How about

So an early Dying Earth story concerns this woman created in a pod by a science wizard but he makes her wrong. She thinks beautiful and good things are vile and monstrous and responds to everything with hate and violence. Her perceptions aren't inverted, it's more like the scale just shifted drastically: the truly abominable still registers as horrible, but in fact seems EXTRA horrible. By the end of her initial story she has come to understand that the world is not as she experiences it, what she has believed from birth is a lie, and she sets herself a path to strive for goodness and beauty and hope in a world where she experiences none of these. She just has to follow an inner compass that knows these things exists but there's no North, no needle, so she has to spin wildly and try to rely on trial and error and degree of revulsion and...

actually she shows up again immediately and gets fixed. By a guy who turns pretty and then they love each other. My. How interesting, Jack. Good write job.

You can choose to level as a dwarf instead of a fighter. If you do, then you're in hell. Everywhere you look, everyone you see, carries the taint of the infernal wrack. The DM has to describe anything you ask them to in diabolical terms. This puts you on high alert: you are only surprised on a 1/6, and never surprised by demons or devils. Moreover, a true devil/demon can never hide itself from you, because they stand out as truly grotesque things. Illusions, charms, invisibility, polymorph, whatever would hide a hellish influence from another person falls away for you. These creatures shine out like a beacon. And when you see them, they KNOW you see them, magically, and make a Morale check.

It's a pretty simple mod that can add a lot of flavor and be played a few different ways, while giving you some mechanical advantages that will mostly play off later in the game when your crew goes a-horror-hunting.
Posted by Daniel Dean at 10:17 PM