My prompt for Secret Santicore 2014 was a 1d20 table of secret cults and guilds of the Desert Kingdoms. The Santicore 2014 PDFs up now have what I turned in, a d30 table. However, it was meant to be a d40 table with a lot more information attached to it. Time didn't permit the larger tables and so I just edited everything down to what I thought were the most unique/easily usable 30 (it was a hard ratio to judge) and have been pecking away at the supplementary material when I've had a minute in the interim.

First we'll pick up where the Santicore table on page 10 of the People book leaves off, and then there's an embedded table of the combined 40 groups, along with their signature weapons, their token or sign or mark, which of the other guilds and cults they ally themselves with, which groups are their sworn enemies, and superstitions and taboos within this subculture.

31. Large stick insects, boulder-sized antlions, and chittering, burrowing skin cicadas whose mating call vibrates your teeth. These once roamed parts of the desert like a plague, or perhaps like kings, until from distant seas the serpent-stranglers of Huecefaim arrived with their whistles and secrets and books of scars on their arms. In the language of trade people they’re called Crabsellers, a name not too disjointed from their current role: keepers of the creature caravan, makers of insect armors, trappers of snapping mandibles. They have become perhaps too fascinated with their charges. They trade blood. They board them like pups. Perhaps they have tamed the desert, and perhaps the creatures have found new ways to be kings.

32. Sometimes a guy just wants to get drunk and blow off some steam and complain about his husband. Even the most discrete saloon has ears in the walls, however, and maybe you want a little privacy from time to time, especially to discuss important business matters. Is that too much to ask? That’s not what the stoneshapers of the Corridoreans think. It takes at least six of them, and they have to be pretty drunk. To be honest the order has been around a long time and everybody was pretty wasted so they’ve forgotten just how they came to learn to do this, or how long it has been going on, or how many chapters there are. But this secret society of honest, hard working people create secret places for themselves to drink, whore, and maybe set up an...arrangement between members? A little you scratch mine I scratch yours? That wouldn’t be WRONG, would it? Of course not. Ahaha Olmenoc farted!

33. Murderers live. They know things. Thieves live. They know more things. Kings live. They know fewer things but the things they know are more valuable. Sorcerers, monsters, heroes, and demons all live on thanks to the Tallowists, the custodians of the dead, the ferrymen of the necropolises, and the lamplighters of war. The Tallowists are necromancers who form the sin and secrets and fire and flesh of a being into magic candles. They burn these to various magical effects, and know how to speak to the living creature which helped to create any candle, the spies we not only keep close but purchase for the purpose of spying on ourselves. They are well protected by the Melting Men and the Whiter Fire. They are much needed by cities burdened with the dead and dying. We would live in a world of rot and stench if not for them. Instead they bring us candles perfumed with ginger and lavender, and expectant with hate.

34. Little Tall Scratch comes in at night. Little Tall Scratch is there when you don’t see him. Little Tall Scratch walks on your houses. Little Tall Scratch smells blasphemies. Little Tall Scratch lives for the wicked. When a person is exorcised from the Plume of Jekjek they are cursed. Their face is marked with horrible scabs and oils, their body twists in shame, and they cannot walk in their city, cannot breathe their city’s air, cannot bear the light of its sun or else their blisters bubble and burst and scar and they slowly turn to a waiting-for-death-thing. There is one way these heretics may earn their way, not out of damnation, but an early release from a life of pain. The Plume employs them as ghosts, as spies, as murderers, as bedtime stories. They walk the city on stilts. They touch the city only with scythed polearms. They clamber about the city in heavy sacking shrouds and disappear people and sussuruss and generally make themselves known, and feared, as demons. Only the good graces of the Plume can protect you, they say, from these demons. They’re right when they say that but not for the reasons they thing.

35. The Arbikine are called often the Warters, and they are guides and bodyguards for the right price. They have their own agenda, of course: the glorying of the bloodfrog. Any coin taken is done for the price of the Dig. The Arbikine have been unearthing the great Toad of Worlds, a temple carved from a statue, a statue made of a single piece of star-metal. The Dig has uncovered the servitors of the Toad of Worlds, dextrous, intelligent, hungry, servile. They regenerate from any wound, but they are not clever. They serve the Arbikine now at World Toad’s behest, because man and his kind are more useful. They carry their new minor lords across the desert stoically, knowing that man is more useful for now….but nothing can kill these riding toads. They need but serve a while longer. Not much longer.

36. Hunters and messengers, companion and fashion, the birds of the desert have been turned to the needs and luxuries of its kingdoms. There are some, though they serve, they rule: these are the chiefs of falcons, Cloud-Climbers, soaring tsars. They abandon their terrestrial flesh to fly in the bodies of hawk, of eagle, of pigeon, of vulture. They take up the new flesh of a waiting vessels. In this way a messenger bird always brings two gifts: the intended message, and a new mind inside a trusted face, able to further the kingdom of the air in unexpected ways, employing new secrets and magics. The Feniphex are so feared that those who keep birds are never confronted with the existence or nature of their organization, lest they rouse the ire of the sky. Some keep birds for this reason: to be afforded respect and station they do not deserve. The Feniphex are merciless towards these.

37. In wetter country and prettier states there is a saying that weak men say: “Fat makes farmers, suffering makes spears.” The intended message (that a populace allowed to sate itself on its own excess is a peaceful one) is lost on the Fleshtillers, hanged men all, spared by the gallows-god to make its war preparations. They are the whispering torturers who drag folk into the scrub wastes and mine their pain, their sorrow, their deaths. From these they have the craft, from gallows-god, to produce steel, a kind redder, lighter, stronger, and more toxic than any steel of man. To be cut with this steel is to feel the death of another man, which is usually enough to kill anyone outright. The Fleshtillers grow fewer each year because of this awesome power, but they grow bolder and more dangerous, too.

38. Before the desert there were things unlike men who were drowning in endless salty sea. They cheated their end by transfiguring themselves into eleven glorious golden sabres. Any swordsman of repute or skill has heard this story, as well as of the many warbands, mecenaries, and assassins over the years who have taken that name. In actuality this is not several groups but one: the same race from before man, before the desert, whose spirits override those of any who carry their sabres. Usually the sabres wait in a cave, waiting, going madder through the centuries. When a vessel comes upon them they take first him and then his companions, his countrymen, his family, whoever is at hand. Then they cut a swath of legendry thick enough that they may not be forgotten before sending their vessels back to the sabres’ resting place. The Glorious Sabres must be remembered lest their power fade and they pass out of the world, and that must not happen for, though they are remembered as accomplished swordsmen, the things which were not men called themselves something closer to Keybearers, and they still seek the door they sought when all was ocean.

39. A skeletal trane marches between the Rubied Empire and the Opium Cliffs. They were turned about in a sandstorm, refugees from the Empire’s sacking a century ago, and their flesh was sandblasted from their bones. They march in despair and desperation, sustained by the horrors wreaked upon them, for sanctuary at the Cliffs. This sanctuary was denied to this macabre march, and so they turned homeward, only to find their old Empire rebuilt more glorious than ever...and fearful and hateful of the Last Caravan, barring her way. They have marched between these poles, sometimes getting lost, sometimes needing guides, sometimes waiting weeks on provisions which the dead don’t need. Some are aware of their fate and are resigned to it. Within the caravan, though, is a hate stronger than any curse or tragedy, which would see both kingdoms and the desert itself burned from the world for this injustice. These are the Sandmothers, and their wrath and agents have shaped trade, religion, and folklore for decades. They have killed two kings and one emperor, while only marching, and they still can’t get their babies to feed...

40. In the towns there are tiny, thin blue beings who crawl around like mice. In the waste they climb onto the stumpy hands of thin blue beings the size of children, becoming their fingers, but retaining their body and shape. Those children run into the distant scrubs beyond the sun-scorched steppes and join with thin blue beings as tall as trees, and then those beings turn toward distant canyons, toward mountains….These ancient shadows have existed as long as the desert, running to and fro. No one knows their mission, though many rumors and small religions have sprung up around them. There are also the Fingerwalkers, adept at tracking the little blue devils, who seem to know every safe passage, every hidden cache, every invisible secret of the desert. Fingerwalkers paint their own fingers blue in solidarity, so can easily be found, and they will guide you along the blue paths for a price...and for all of your fingers. Some say that they need these to appease the blue people. Some think they’re just dicks. 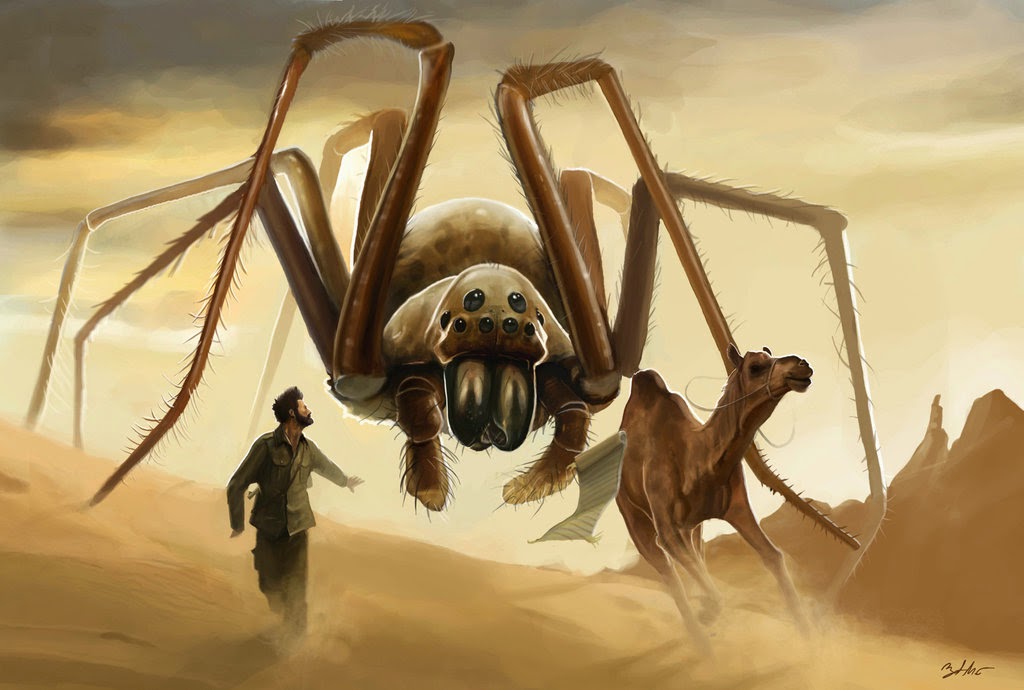 Click on the image above by a guy named MightyGodOfThunder to go to the aforementioned d40 spreadsheet of all the desert clans and their extra tidbits!

It should work like that but if not then the info can be found here.
Posted by Daniel Dean at 6:04 PM