Time and Tech for CaBH + Forte and the Rust Belt 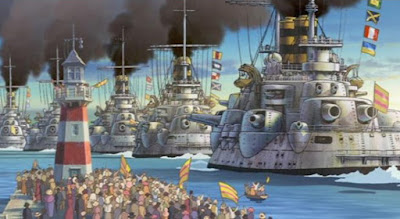 Generally, unless specified, the nations of this world as a whole have a tech level roughly analogous to what we have now, with different countries or regions corresponding more to say an impoverished state (so the tech levels in the definitely-not-ghettos-why-would-you-ask in Johannesburg) to an ultramodern upper class one (Akihabara or Silicon Valley). Broadly speaking most people have access to a phone, of not a cell phone, though exact tech will vary.

Chevalle, for example, has a kind of high-tech-60s-to-70s, Archer-the-tv-show aesthetic of outdated Soviet style machines made to work for the modern world through great effort. While there is not a Japan or USA in this world per se the kind of culture we enjoy with our technology would be a step or two beyond what we have now, about the advancement level we'd be if everyone's Alexa was instead Deep Blue and that's about it. There are, as detailed below, exceptions.

Where Feng Shui is concerned when it comes to technology the key things it's concerned about  is time period or Juncture, and even this is 90% concerned with what kinds of guns you have access to. The remaining 10% is focused on whether you are stuck with a horse or can have a hoverbike. For our purposes we'll need to flip those numbers. First things: as FS assumes a default swath of proficiencies implied by your Type, CaBH assumes any racer proficient with their own Vehicle no matter the tech level of their background or the vehicle involved. Since the appearance and description of these will vary pretty wildly that's...good.

Apart from that there's nothing especially preventing a character from 1350s Mongolia from picking up an AK47 and figuring it out. It'll just take different rolls until enough practice is under their belt to imply proficiency, and this is using action movie definitions of "enough practice" where random dishwasher Jackie Chan can effectively use a bazooka when he needs to.

An exception to this is what the game dubs Scroungetech, weapons and body-modifications designed using machines from the far future designed to warp reality to the same extent as magic. The default setting's Scroungetech stuff is in flux due to plot shit, like the future blowing up and being run by monkeys. For us, though, Scroungetech simply represents a technology that is beyond. Perhaps it comes from a pocket of AI-assisted potential, or was designed with help from the future in some kind of Contact-cum-Looper situation. It might be the result of some kind of unique Holtzman-Spengler genius, or the kind of strange Tesla machines Lovecraft had in mind when he first wrote Nyarlahotep, technology created with understanding outside our world which allows for impossible things...

Very few Types make use of Scroungetech as a core component. If you're one of these Types you are either from one of the following places or your transformation was rooted there. Just finding such devices in the world, however, may not carry any geographical significance. It could have come from anywhere and, with some trial and error, is anyone's to use. People from high-tech nations will just have an edge, is all.

Forte is a kingdom with one foot in tomorrow. The seat of all technical advancement and medical breakthrough is one where every man is just a bit machine and every machine is just a bit man. AI capable of a level of independence, bio-assisted computing, smart prostheses, and other advances mean every person you speak to in Forte may be several "people" with their own identities and ideas. Forte is a futuristic paradise in many respects but at the cost of uniform participation as a requirement of citizenship - those who wish to abstain from any form of Communion or who see Derived Beings as inherently lesser are not punished except by forced emigration, before which any Fortean 'assistances' are removed. They share much of their gifts freely with other nations but require both a share-back guarantee for other advances and representation within that local government - an ambassador who is themselves a whole embassy. Tracking their leader is nearly impossible for someone unconnected to their framework so dealing with any sort of department head or group spokesperson should be dealt with as if dealing with Queen Victoria herself.

Dumesk was once a nation rich in all manner of natural resources. Many of those were stripped in preparation for a secret war which never ended up happening anyway, the Thrilight Krieg, for which neutral Dumesk was a seat of production for many nations. Abandoned factory and housing complexes nearly cover Dumesk now and she has little left to sustain her people, bartering with the leverage of incalculable debts racked up by other nations. Its head woman, affectionately known as "Babushka Brunn," has turned the processing power and monolithic thinking engines which fueled her nation's drive to its current state to a new task: developing infinitely within. Other nations can tap into the richer "metaverse" Dumeski peoples enjoy with some great expense or effort but here even the least citizen is able to neuromance with the best of them, creating marvels impossible in physical space into which the wind-snapped citizenry escapes. These are projected onto physical space in changing tides so that no visitor ever sees the same Dumesk from one visit to another....or from one street to another. They call it the Square, a nation increased by its own power, but everyone else on the planet calls this anti-apocalypse world "Dumesday."

To the distant west of Dumesk's capital it borders an old rival, Erlin. Erlin's progress has come largely through its mastery of the atom. They are chief when it comes to finding new and strange sources for the world's energies, though they don't always get things quite right. The consequences of this, lamentable though they are, also are inevitable. That's fine: Erlin excels at containment, making them powerful allies for SEDAN. Their society and politics can be a bit old fashioned and Chairman Holland, their effervescent elder statesman and executive leader, can be severe in the finality of his pronouncements. Nevertheless, Erlin is a place rich in transformation, discovery, and growth, not all of it planned.

South of Dumesk is what once was the Temple Sea, now something of a ruined heap of oxidizing scrap. When Thrilight Krieg was averted every nation began quickly looking for somewhere to offload its killdroids and death machines. Whoever dumped first is hotly debated but under the logic of "who will notice one more load" thousands of loads of advanced weapons and silver warriors were abandoned in the now-filled salt sea. It was actually a decade or more before the no-man's-land was noticed to be active - alive. Someone forgot to switch something off and a robo-nation made out of itself developed like a slime mold unattended. Since this was something of a no-man's-land already when the machines declared themselves the independent state of Ping their new neighbors decided to, well, roll with it...after all, they certainly didn't have the resources to fight Ping since Ping WAS their resources. The Clients of Ping modify themselves constantly, some serving as edifice one week and individual another. Peer, their representative to the rest of the world, has long reigned over an order of mandatory peace, these fearsome but gentle machines utterly lost without a manmade drive for death.

Finally, the tiny mountain nation of XXXThrill0 is little more than a series of volcanoes bound to endothermic industry. Constantly belching tons of black smoke into the world the small population here which hangs off the mountain faces in its black metal coffins are almost entirely concerned with maintaining mother nature's own imperfect boilers. Theirs is not an aspirational or forward thinking population but when it comes to Making The Thing Do The Thing few can surpass them. Their leader is the long-bedridden Count Dude, his advisor and voice in all matters of state the fearsome and canny Desdemona Troyer, and their most famous citizen....well, no one will officially say he hails from XXXThrill0 but we all know who we're talking about, don't we?
Posted by Daniel Dean at 3:23 PM