REVIEW: Justice for the Blind Ghouls at Shaggermor, by E. P. Ngyuen and IVANOV 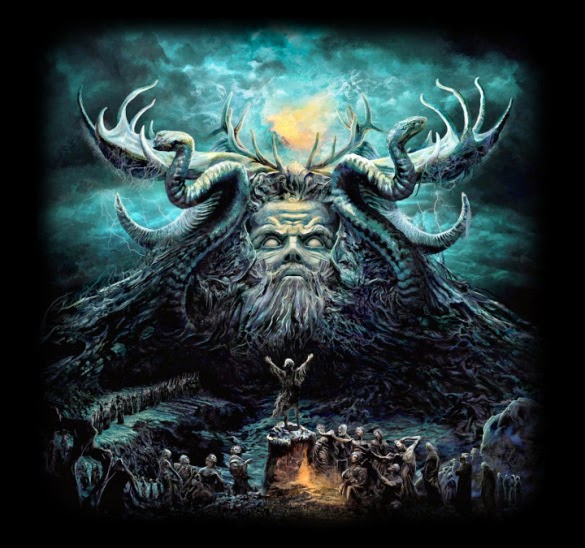 And I beheld the visage of Ivanov, alabaster and all-color-maned, and at the behest of Rintrah did the the designer of PRIPYAT and artist on Nuke Year Holocaust emerge slowly form and give the gift of sight to the twisted imaginings of impoverished veteran Elvis Presley Ngyuen, one of the great One-Hit Wonders. Lo- a scream of spiders, all painting the Last Supper, came down the halls of Adder Entertainment and the transcript of the 911 call (placed by someone still unaccounted for or named) did resemble a 44-page adventure ripped from the most lurid and cheap grindhouse horror purchased by mail order and screened at the Æ Hanukkah shindig.

Ngyuen came to New York after the war and acquired citizenship with little in her pocket aside from some naan and an unpaid citation from Can Tho municipal for illegal parking of a god, who has since been impounded, inspiring renewed interest in the relic and renewed municipal citations for trespassing. What she had picked up by the time she signed on with Æ as Receiving Notary was a love of Blondie and some self-evident influences from The Wicker Man and Night of the Seagulls. All of these, especially Atomic, are on display in Justice for the Blind Ghouls at Shaggermor, the only module that we know of whose street date was determined based on its author's cycle.

Blood. That's the name of the game. While any party containing a decent Parson has little to fear from the 'citizens' of Shaggermor so long as they plan carefully, it is a trade in sangre plied between the animate mystic order and the stubbornly extant nature all around them. Eggshells.

I've said this before and I'll say it again but there has never been so cruel an adversary in a RPG as nature, because nature does not even care. Human life is a mistake. Dragon turtles are the antibodies. It's easy to infuse it with a will and demonize it but look you can die from exposure, hypothermia, toxins, wildlife, or topographical hazards in a park and if nature can be said to want to do anything it's simply to outlive you and exist until the sun pins it for a five count. The ultimate factor in all adjudication at the table is how any quasi-appropriation of this time period is a study in Space (which must be covered to accomplish anything) beating Time (that which you are afforded to do anything) to death with history's first shovel because YHWH didn't like Space's sacrifice of corn. Nature is all that wearing a teeth suit.

The art is Ivanov, which is a name which can serve as most parts of speech. This is the infamous "map shirt" adventure that came with a map which unfolded into a t-shirt pattern, double-sided. The text advises us to eschew the physical map, burn it to ensure a fertile harvest, and copy the designs onto a the DM. This seminude style of play made for awkward tables and replayability was something of an issue considering replacement maps could only be ordered using crosswords Ivanov was unable to solve. Later interviews in A Tunnel would reveal this to be part of a publicity stunt by the then-dawning Æ Tattoo Society, a unique fan club who outlasted the company by decades and whose regular elevator terrorism has had them barred from most Gen Con friendly hotels. To no avail.

But what Shaggermor? There are older gods than the old gods, cults and heretics burned. Their macabre vengeance and strange rites have robbed the very land of its proper due, of the traditions people don't even know are traditions and not just How We Are And Are To Behave. Ngyuen had a particular fascination with Haitian culture and draws a parallel between that, Taoist mysticism, and the traditional Asterixian druid that would take an anthropologist or a poet to do credit to here. Her adverbs alone are sublimity. Ivanov once shat on a kid.

Some adventures are merely survived and what an achievement that is. The party of Shaggermor must bear witness and pass sanction at several points during the campaign. This is where Advancement and Reward comes into play, and only those who go full Treasure of the Sierra Madre are actually ensured a green or toothy end. Well, apart from service to the earth, and the bloodcurse the party must pay off every Ha'moon with virgin price, should they raise Shaggermor.

No, that's not a formatting error. You can raise Shaggermor.

Assorted apologies: THAT was a formatting error. You should raise Shaggermor.

After Ngyuen became a friar in Californian snake-handling, she renounced RPGs as tools of the Devil, saying they did not serve the Devil effectively enough. She currently hosts a YouTube channel where she discusses Carry On films.