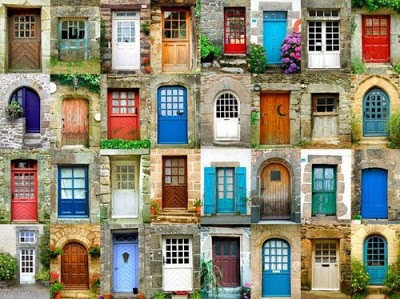 "Those doors were all different colors."

I will never publish a book and I try to never bitch about how I will never publish a book but if I did oh man you guys...kind of thing. One of these books I will never publish is essentially just some big prose poem of a few thousand good first lines for books. Like fuck if I know what the book is that starts that way but I'd read that, maybe. I have a small list somewhere and some are good some are bad but there's a fairly boring ass one which has stuck with all permutations of this project's objective nonexistence because it fascinates me. I don't remember when I wrote it or what I was thinking and thank crap for that.

The doors are normal. Even in rainbow. People paint doors. It happens.
Each door was a different color paints a kind of nonspecific picture, like what I saw in my grandmother's bathroom mirror, but the focus there to me is on what color the doors were. Exciting??? (?)
All the doors were different colors to me places the emphasis on the number of doors.

That predicate is awkward and American. The doors in question: all different, as in no color is repeated on any door, or all colors, as in every door is a Lisa Frank Jackson Pollock Naked Lunch Color Out Of Space thing? And if that's what they were, what are they? First sentence here so this could be the beginning of some larger transformation, right?

Not all the doors are painted different colors. In fact most of them aren't, because were that the case we'd be talking about most doors. We're not. We're not even talking about some doors here, a subset of the set we can define as {Doors in an office} or {Doors in a house} or whatever, hereafter {The Doors}. Like a few doors are painted and they changed it up, who cares?

But our sets are not {The Doors} and {That Which Is Not Doors} here, for there are also {Those Doors}, specific for reasons which prevent generalization. Belonging to neither group, which alone can, if I let it, inform whatever I need to push that story forward. How many doors do we have anyhow if we have everything you'd put in {The Doors} and we still have surplus doors to talk about? Why do Those doors exist whatsoever? Who put them there? Who uses them? Why paint {Those Doors} and not {The Doors}? Why paint each one of Those doors differently? Do the colors matter? Were they painted at all or does their very composition give us some different Pantone? Do the doors matter? Or do the presence and/or hue of Those doors instead give us information about {That Which Is Not Doors}? Who is using these doors, and where are these doors, and how are the doors used exactly, and WHERE DO THE DOORS GO? WHO CAN USE THE DOORS? WHO KNOWS ABOUT THE DOORS? WHERE ARE THE DOORS?

My head tools are meager but I can build a home with this or a hospital, a tragedy or a comedy, a yarn of the supernatural or a military industrial satire, a boy story or a girl story (in the Neil Gaiman sense). We could probably do us a dungeon. It's not much but it's a start and that's the whole point.

I have more exciting sentences. I've actually written some good ones. I've also written several thousand words on purpose of a book which begins "The world is home to two types of people: Dracula and go to hell." So I may not be the best judge.

I cannot escape this, though. "Those doors were all different colors." They're coming closer. I'll have to deal with {Those Doors} soon.
Posted by Daniel Dean at 2:27 AM No comments:

Email ThisBlogThis!Share to TwitterShare to FacebookShare to Pinterest
Labels: what
Newer Posts Older Posts Home
Subscribe to: Posts (Atom)
IT'S NOT SAFE FOR WORK