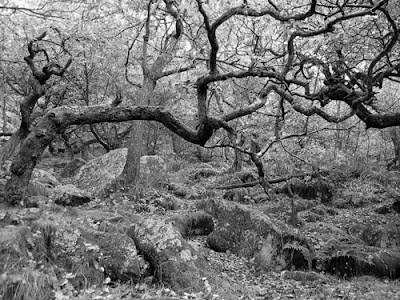 Dream in color if you must. Nightmares are in black and white, and we play nightmares.

The world is very much like our past. There are fantastic creatures and ancient races apart from men but they are rare, rare and scattered. No great elf cities or endless dwarf labyrinths. There is magic, too much magic, but it doesn't make itself very known. Few can harness it. Technology level is Seven Samurai - there are guns and they are a big deal but they are uncommon and don't run the whole fight. In fact the village from Seven Samurai, the little towns that are always a few hours' ride from Dracula, remote towns in the southern US that survived apart from great plantations, and ancient estates of New England where imported old world charm met the uncertain new world and that terrible time pervading everything that Lovecraft never shut up about.... all might serve as good road maps for what I'm going for, barring the occasional elf. As a guideline if you can imagine it happening in Solomon Kane then it's on the table.

Rules will be the Parts Of Lamentations Of The Flame Princess I Remember, with the following five major exceptions:

1. SAVES are ignored in favor of a single-save system akin to what Swords and Wizardry does. This will be your highest/hardest value for your given saves. At level 2 you add +1 to all Saves, at level 3 you add +2, etc. improving as you level. Rolling a 1 on a Save is still failure. Everything is rolled against this single Save. If you have a Wisdom bonus you can add that to your roll as well.


2. Do not make halflings, and do not use the LotFP rules for elfs. Use the halfling rules to govern elfs if you want to play one. You can use a shortbow like this.


3. You may use Vaginas Are Magic! style spellcasting if you want (level=safe spells per day, save when casting beyond that or casting in adverse conditions, no real spell levels any more, penalties to failing your spellcasting save) but all spell failure will be rolled on a table made just for this game.


4. Your XP will basically be based on what you survive, not what you kill and/or loot.


5. FLAILSNAILS races and classes may be permitted if they sort of fit the milieu I described above. Largely pastoral and downright quaint places where the darkness either invades or whence you must venture to find and fight the darkness Just Because. Dungeon Crawling Is Fight Club. That said I'm much more likely to assent to something weird if you've played something more sober and died already.

You are not special and your heritage is probably not special. In all likelihood no one will ever thank you for what you do, if they ever know about your deeds at all. You are not here to save the day. Your escapades are dangerous bordering on self-destructive but CHOOSING to undertake them is the most power you'll ever have in life, on average.

OUR GAME BEGINS IN EARNEST...

In Welbin, where a mining expedition has stopped to make camp for the last few days. People in the company have come from all over and the longer they remained in town the more folk came from nearby territories looking for work. You have heard there is a chance for decent, honest hard work. You have also heard that this expedition is doomed, chasing a haunted claim. You may not need the money but for your own reasons you NEED to join this company.

Some of you are surprised to see figures from your dreams. You remember two lives - the one you awake into on a gray Welbin morning where you have toiled separately in your tiny worlds until this adventure thrust you together; and a life where you all came up together on the open ocean, sailing to exotic lands, enduring a series of black magic curses before finally washing upon the mainland and going your separate ways. You see the recognition in their eyes. None of you comment on it.

You have taken the time to provision yourself and the company is beginning to pull up stakes. There's nothing for you in Weblin. But you don't hope for a bright future in the Shambles. Last night you slept on an impromptu cot arrangement in a sun-warped church. Tomorrow you sleep in MacGregor.