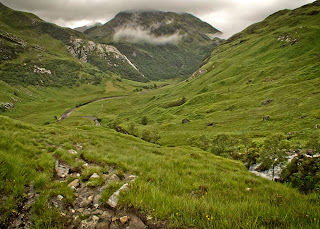 People of all nations had gathered in Vem Virantur, the Brass Gem of the Valley, for the Festival of Bells. A magician performed for the leaders of these peoples, and whether they were cruel, incompetent, or drunk, no one knows - like the magic-user's name it has been lost to time. What is known were the last words he ever spoke:

"It's a great trick but I can only do it once."

An explosion you could see as far away as Heela and hear deep in the Mossy Mountains split the countryside. The earth here grew black. Vem Virantur was no more, its stones blasted to atoms and its people lost to eternity. Those who came to assess the damage found themselves preyed upon by peculiar poltergeists and declared the land cursed. The people of the Five Fingers turned their back on this hidden valley, now known as Blackglade.

Vem Virantur was not lost, just misplaced. At a scale smaller than any would think to look the city (mostly) survived. What's more they were surprised to discover that they were not alone - that they figured in as the oppressors and monsters in the life of a suite of indigenous peoples who had always existed at the edges of the Brass Gem. These were kept to a peace by a pragmatic Nomic monarchy who forced grievances aside to form a new kingdom.

The Nome King foresaw a coming of invaders, soldiers from beyond the Five Fingers who would lay waste to the old kingdoms and Blackglade along with it. Uniting as one society in a new melting pot city the Shadow People (formerly big) together with the Sun Tribes beseeched the spirit forces that infused the very valley, turned restless and hungry by the magical malestrom that shrank Vem Virantur. Together with these spirits they turned back the incursion of these strange plunderers...though what became of the big old kingdoms is unclear.

The old gods had changed, and neither party could hear one another. The creatures of the Nite Wheele became the new pantheon to which all were bound, who drove the progress of this new way of life. The Old Queen was one of the last to convert and, for her punishment, was given unnaturally long and wan life. She ruled kindly regardless, finally relenting in the face of the compassion of the celestial beasts, who Hushed her with love as if they had only waited to be asked. This led to a tectonic shift in Vem Virantur society and faith, which now infused all things.

Whether it was losing the protection of the queen or the new, casual devotion of the peoples that drew the attention of goblinkind, causing them to materialize from the edge of the civilized valley, none can say. What is known even today is the wisdom which outweighed cruelty: the calculated forgiveness of Morgotha the Goblin Princess. The Pleasant War was waged slowly but without bloodshed, being mostly a game of secrets, blackmail, and confusion. The truce was finally won with the Gaoler's Compact which sentenced fourteen "prisoners," great leaders among their races, to serve out the punishment for everyone involved. Imprisoned in the roots of the Watching Wood they serve their sentence still, carrying out the hardest and most onerous labor: acting as a detached council of governance for the now very, VERY integrated Vem Virantur.

It's over a thousand years since some magus said "hold my mead" and changed the world. Even among the longest-lived races no one alive remembers the old ways, though it's only a couple generations away. The last of the Old Queen's children, the Youngest, twin and eternally uncrowned monarch of Vem Virantur, carry out a benign reign over the good city today.

It is their birthday.

Unearthed Arcana class and race options are off the table for now.

Every player gets 1d6. This can be spent on any other player who you think is doing something really kickass or true to their guy. These refresh each session so never save these, just support each other and go all out with your choices, both tactical and RP. As DM I have one of these dice as well, except mine is a d20. If I give out the d20 then everyone else's d6s refresh immediately. You can use these rolls to improve any roll. This is what we have instead of Inspiration.

Provide me with your Dexterity scores and Passive Perception.

I will track your Advancement myself. I typically reward you less for what you loot or defeat and more for what you SURVIVE. You will generally all level at about the same rate however...
XP Dice are d12s. Also, the GOLDEN RULE FOR XP is that I give you a little bonus whenever you describe what you're doing in tiny terms. Cups made of acorns, stopping not at a stream but at a convenient dewdrop, etc.

So, who are you playing?

SHADOW PEOPLE
who were once big and now aren't:

SUN TRIBES
whose pastoral life in the valley now called Blackglade was forever changed in the KAZOW:

SPIRIT PEOPLE
which, if you play one of these, you are playing the least aspect of a larger cosmic god-force

NOT ON THE TABLE

...such as DIY 5e class options or races or backgrounds may or may not be fine depending on whether they fit the world okay and don't contradict any of the above. If you think I won't assent to something just ask me but I'm going to be loose with it, I let people play vampires for God's sake.

MAGIC AND THE GODS

There isn't a meaningful distinction between divine and arcane forces - that divide, like the D&D planar divide, doesn't hold here. It's all the same stuff. But arcane magic can come from anywhere : your own spirit powers, a gift conferred to your bloodline in the KAZOW, some item you discovered or a mantle you were bequeathed, or even the worship of the Nite Wheele. Clerics and Paladins and stuff draw their strength exclusively from the Nite Wheel who govern all things. That's not to say that you particularly favor this spirit or that spirit. Your power comes from the entire zodiac. However, you may be consecrated to a particular spirit's service.